The 2019 FMF World Cup was the twelfth tournament of the FMF World Cup, and was held in Birgeshir between 12 July and 18 August 2019. The twenty competing national teams all qualified successfully to be involved. The tournament's matches were played in eight stadiums in seven different cities around Birgeshir.

The tournament was won by Senya, for their first ever title, who beat Mercury in the final in Otaq. 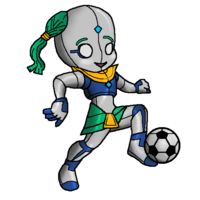 The culmination of the opening ceremony.

Following Birgeshir's awarding of the hosting rights, the official tournament logo was unveiled on 31 December 2018. It features a stylised trophy design incorporating the colours of the Birgesh national flag and other colours representing unity with other nations around Micras.

On 1 January 2019, the tournament became the first FMF World Cup to unveil an official mascot; Tutandroidmon, an android child dressed in the colours of the Birgesh national flag who has a dream that one day even androids can play football. The mascot was chosen through a public vote over three other designs; a mummy, a Roman-like statue, and an anthropomorphic scarab. The winning mascot was chosen because of its metaphorical value; the child representing the small nation of Birgeshir, and the big dream reflecting the hosting of an FMF World Cup which was thought to be an impossible event for a nation of such size.

The tournament was also the first to stage an official opening ceremony, hosted by Cumhur Köprülü and Gizem Qelhatojka.

Teams were required to name a twenty-three-man squad for the tournament, with three goalkeepers, numbered 1 to 23.

Team of the Tournament