The Shireroth national football team is the football team which represents the micronation of Shireroth. It is a member of the WMFA and is run by the SAFL.

The team was founded in 2007 after Shireroth was granted FMF membership after existing on Micras since before the organisation's founding. Later on the year, the team competed in their first qualifiers for the FMF World Cup, being eliminated from the WMFA first round on the away goals rule after drawing 3–3 with Greenuk on aggregate.

The following year, the team improved, successfully qualifying for the 2008 FMF World Cup with aggregate wins over Istvanistan and Mania in the first and second rounds, respectively. In the finals, held in neighbouring Amokolia, the team won both of their opening two matches 1–0 to advance to the quarter-finals, where they lost 6–4 to Bobalania in extra time.

In the 2009 qualifiers, the team finished third in their five-team group, behind Batavia, and missed-out on a play-off place by virtue of goals scored.

The team finished second in their group in the 2010 World Cup qualifiers with nine points and advanced to the play-offs, where they were beaten 3–2 by 2006 World Cup winners Beaugium on aggregate.

Shireroth successfully bid to host the 2011 FMF World Cup and so the team did not have to qualify. In their finals group, the team were fortunate to advance in second place with four points. In the knock-out rounds, however, the team were more impressive, beating Tellia 3–1 and Interland 4–2 to set-up a meeting with holders Craitland in the final, where they lost 1–0 to a last-minute goal to finish as runners-up.

The team's successes continued into the following year's World Cup qualifying, where they topped their five-team group with 21 points to ease into the finals and also seal a place in the inaugural Benacia Cup. In the World Cup, the team advanced from their group on goal difference with three points, but were beaten by eventual champions Tellia in the quarter-finals. In the Benacia Cup, the team finished second in their group before beating neighbours Sanilla 2–1 in the third-place play-off.

In the 2013 qualifiers, Shireroth topped their four-team group with 13 points to seal qualification to both the year's World Cup and Benacia Cup. In the Benacia Cup, the team finished in third place with seven points, missing-out on a place in the final on goal difference to Sanilla in the process. In the World Cup, the team was also unfortunate, as they failed to advance from their group by virtue of goals scored to Tellia after finishing with four points.

Shireroth missed-out on a place at the 2014 FMF World Cup after finishing second in their four-team 2014 qualifying group with eleven points, one point behind Elwynn, but qualified for the 2014 Benacia Cup, where they finished in third place for the third time in a row.

In 2015's qualifiers, the team topped their four-team group unbeaten with 16 points, and returned to the World Cup finals after a year's absence. In the finals, the team finished fourth in their group with five points and failed to advance to the knock-out rounds.

The 2016 Benacia Cup qualification rounds saw the team finish second in their six-team group with twenty points to advance to the finals, where they failed to advance from the group stages after finishing with one point.

In the following year's World Cup qualifiers, the team finished second in their four-team group with 15 points; missing-out on qualifying by finishing behind Craitland on goal difference in the process.

After winning the hosting rights to the 2018 Benacia Cup, Shireroth qualified automatically and instead participated in the 2018 FMF Confederations Cup, where they finished third in their group with six points. In the Benacia Cup, the team performed well as hosts, topping their group after winning both matches and beating Merenolitovina 3–1 in the semi-finals, but lost to Craitland after extra time in the final.

In the 2019 World Cup qualifiers, the team topped their six-team group with 25 points and advanced to their sixth tournament finals. In the finals, the team advanced from their group in third place, ahead of reigning champions Tellia, with six points before losing on penalties to the Florian Republic in the play-off round.

In the following year's Benacia Cup qualifiers, the team topped their four-team group unbeaten with 14 points and qualified for the finals. In the finals, the team's fortunes lessened as they finished bottom of their group with two points.

In the following year's Benacia Cup qualifiers, the team topped their five-team group unbeaten with 18 points to qualify for a seventh Benacia Cup finals. At the Benacia Cup, they were eliminated in the group stage after finishing bottom of their group without a point to their name. 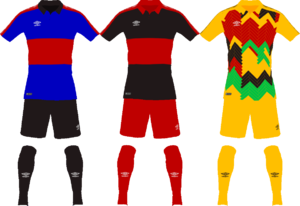 This squad was called up for the 2018 Benacia Cup. The starting lineup uses the 4-4-2 formation.

Shireroth has used the following flags during its FMF affiliation: