The Batavia national football team is the football team which currently represents the Shirerithian autonomous territory of Batavia, and previously represented the Jingdaoese, Batavian Confederation and Franco-Batavian constituent nations, and independent nation of the same name. It is a member of the WMFA and is run by the KBVB.

The team was traditionally seen as one of the strongest national sides on Micras, having qualified for five FMF World Cups, and has existed twice in the FMF's history; firstly between late 2007 and mid-2015 as an independent nation and constituent nation of Jingdao, and secondly since mid-2018, as a constituent nation of both the Batavian Confederation and Franco-Batavia, twice again independently, and in its current form.

The team was founded in late 2007 after Batavia's Micrasian claim was successful. The team competed in its first World Cup qualifiers the following year, where it was drawn against Tellia. However, the Tellians withdrew from the WMFA sector, meaning Batavia advanced to the second round of qualifying as a result of a 10–0 aggregate scoreline forfeit. The team beat Beaugium 2–0 on aggregate to qualify for the 2008 FMF World Cup. In the finals, the team finished third in its group after losing their first two games but beating Toketi 7–4 in their final match.

In 2009, the team finished second in their qualifying group, placing ahead of Shireroth on goals scored. This meant that the team advanced to the play-offs, where they beat Ashkenatza to qualify. In their second consecutive World Cup appearance, the team finished third in their group, this time missing-out on advancing after losing their final game to Alexandria.

The team won its qualifying group in 2010, only losing one game. The team also topped its group in the finals, advancing to the knock-out stages for the first time. However, the team lost to hosts and eventual finalists Hamland 5–3 in the quarter-finals.

In the 2011 qualifiers, the team finished top of the WMFA's sole six-team group, finishing three points above Tellia. In their finals group, the team could only draw two games as they finished third, equal on points to débutants Babkha in fourth.

The team finished second in their five-team 2012 qualifying group and advanced to the WMFA play-off against Ashkenatza, winning 6–4 on aggregate to qualify. In the finals, the team advanced from their group with four points, behind hosts Antica by a point, before losing 2–1 to Hamland in the quarter-finals in extra time. The team also sealed their place in the first ever Benacia Cup later in the year, where they topped their group before losing 1–0 to Tellia in the final.

In 2013's qualifying, the team's fortunes lessened as they could only finish third in their four-team group with eight points, failing to qualify for any tournaments. During the qualifiers, Batavia was annexed by Jingdao, which itself seceded from Batavia in 2012. Soon afterwards, Batavia regained independence after seceding from Jingdao, before splitting into two political entities but maintaining a unified team.

Batavia reunified in 2014, during the team's participation in the year's qualifiers, where they finished second in their four-team group with nine points to reach the 2014 Benacia Cup. In the tournament, the team drew one of its three games to finish bottom of the group stage and subsequently place fourth in the final standings.

In the following year's qualifiers, the team finished second in their four-team group with eleven points, and failed to qualify for the World Cup for the third year running. Batavia left Micras in mid-2015 after being declared dead.

Batavia returned to Micras in mid-2018 after annexing Transbatavia. Batavia became a constituent nation of the Batavian Confederation in 2019, during the team's first World Cup qualifiers since rejoining the FMF, where they finished second in their five-team group with 14 points, before regaining its recognised independence later in the year.

Ahead of the 2020 Benacia Cup, which Batavia successfully bid to host and for which the team qualified automatically, Batavia joined with Francia to form the Franco-Batavian Empire, with each constituent nation retaining its separate FMF membership. As a tournament host, the team participated in the year's FMF Confederations Cup, where they finished second on goal difference in their four-team group with eleven points and advanced to the semi-finals. After losing to Mercury and Lamantia, the team ultimately placed fourth. Batavia once again became independent shortly afterwards after Franco-Batavia was dissolved. In the Benacia Cup finals, the team advanced from their group in second with five points, behind Elwynn on goal difference, before losing 5–0 to Craitland in the semi-finals, but beat Elwynn 1–0 to place third.

In the 2021 FMF World Cup qualification rounds, the team finished second in their five-team group with 18 points.

In the following year's Benacia Cup qualifiers, the team finished second in their five-team group with 16 points to advance to the play-offs, where they lost on away goals to the Sovereign Confederation after tying on aggregate. Batavia was annexed by Shireroth later in the year but retained its FMF membership. 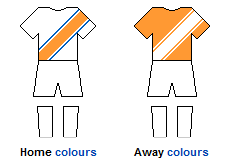 Batavia has used the following flags during both of its FMF affiliations: