The Lamantia national football team is the football team which represents the Senyan autonomous region of Lamantia. It is a member of the AEFA, and is run by the FVL. The team is the official successor of Fort Kolgrad, and as such retains its records.

The team was founded in mid-2017 after the foundation of Lamantia as the successor state to the Senyan autonomous territory of Fort Kolgrad. Under the name of Fort Kolgrad, the team competed from late 2013, and first played in the 2014 FMF World Cup qualification rounds, finishing fifth in their group, before placing third in their group in the following year's qualifiers.

In the inaugural Copa Apollonia qualifiers, the team advanced to the play-offs and beat Toketi to qualify for the finals, where they subsequently lost their three matches. In World Cup qualifying the following year, the team again reached the play-offs, but were eliminated in the final round on penalties to Jingdao before Lamantia succeeded Fort Kolgrad later in the year.

The team first competed as Lamantia in the 2018 Copa Apollonia qualification rounds, where they topped their six-team group with 21 points to qualify for the finals. At the Copa Apollonia, the team advanced from their four-team group with four points before losing 2–1 after extra time to Stormark and 1–0 to the Florian Republic to place fourth.

After Lamantia successfully bid to host the 2020 Copa Apollonia, therefore qualifying automatically, the team participated in the year's FMF Confederations Cup, where they topped their four-team group on goal difference with eleven points and advanced to the semi-finals. After a loss to Senya, the team beat Batavia in extra time to place third. In the Copa Apollonia finals, the team advanced from their three-team group in second place with three points before being eliminated 2–1 in the quarter-finals by Alduria. Later in the year, the team competed in the Senyan Anniversary Cup, finishing in second.

In the 2021 FMF World Cup qualification rounds, the team finished top of their five-team group with 21 points, ahead of Tiana by virtue of goal difference, and qualified for a second finals. In the finals, the team advanced from their group in third place with four points before overcoming the Unified Governorates 4–2 in the play-off round, but were eliminated by hosts and eventual champions Floria in the quarter-finals.

In the following year's Copa Apollonia qualifiers, the team topped their four-team group unbeaten with 16 points and secured their place in the finals, where they were eliminated in the group stage after finishing third in their group with three points.

Lamantia's traditional home colours are those used on the nation's flag, and the home strip is usually yellow with a blue trim, whilst the away kit is usually blue with a yellow trim. 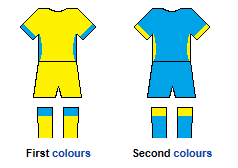 Lamantia has used the following flag during the entirety of its FMF affiliation: