The team was seen as one of the stronger sides on Micras after joining the FMF, winning the CiboTap Championships in 2016 and 2018, and the 2018 FMF Confederations Cup.

The team was founded in mid-2012 after Birgeshir's Micrasian claim was successful. Birgeshir competed in the following year's World Cup qualifying, where they finished third in their five-team group with ten points.

In the 2014 qualifiers, the team finished second in their four-team group to advance to the play-off, where they beat Greater Sangun 5–2 on aggregate to reach the 2014 FMF World Cup. The team also reached the 2014 CiboTap Championships, where they lost their semi-final to Alexandria and finished third by virtue of their qualifying group record. In their début World Cup, the team advanced from their group in second place by virtue of their 2–1 win over Taeland before losing 1–0 to Craitland in the quarter-finals.

The following year, the team were even more successful as they topped their five-team qualifying group with 24 points; winning all eight of their matches and conceding just one goal on their way to a second World Cup finals. Despite their strong qualifying campaign, the team were less successful in the World Cup, where they finished bottom of their group with four points, behind Gotzborg on goals scored, and did not advance.

The qualifying rounds for CiboTap 2016 saw Birgeshir win their five-team group unbeaten with twenty points to qualify for the finals. The team continued their success into CiboTap 2016, where they won their group without losing a match before beating Zandarijn in the semi-finals and overcoming holders Alexandria in the final, both 1–0, to seal their first ever championship title.

Birgeshir's success continued into the 2017 FMF World Cup qualification rounds, where they topped their four-team group unbeaten with 16 points to qualify for a third successive World Cup. In the finals, the team finished second in their group with seven points to advance to the play-off round, where they overcame Elwynn on penalties before losing their quarter-final 3–1 to hosts Senya.

As holders of the CiboTap Championships, Birgeshir automatically qualified for the 2018 edition, and instead participated in the 2018 FMF Confederations Cup, where they advanced from their group in second place with eleven points. After beating Mercury on penalties in the semi-finals, they defeated Senya 2–1 in the final to secure the title. At CiboTap 2018, the team's success continued as they topped their four-team group unbeaten with seven points before beating North Antarctica 1–0 and Vyktory on penalties in the semi-finals and final, respectively, to seal a second successive CTFA crown.

After Birgeshir successfully bid to host the 2019 FMF World Cup, the team received an automatic berth in the tournament. In the finals, the team topped their group unbeaten with ten points to advance directly to the quarter-finals, where they overcame Craitland 2–1. After being defeated by Mercury on penalties in the semi-finals, the hosts beat the Kingdom of Coria 3–2 to finish in third place.

As holders, Birgeshir qualified automatically for the 2020 CiboTap Championships and the team participated in the year's FMF Confederations Cup, where they finished third in their four-team group with eight points. At CibooTap, the team topped their four-team group after winning all three of their matches and not conceding a goal before overcoming hosts Zandarijn 2–0 in the semi-finals, but were beaten in extra time in the final by Natopia to finish as runners-up. Birgeshir left Micras shortly afterwards.

Birgeshir's traditional kit colours were those used on the nation's flag. From 2017 the team's home kit changed to be predominantly all-white (despite no white appearing in the national flag), with trim of blue, green and light blue. The team's away kits were then similar to their prior home kits. 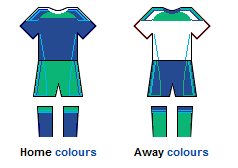 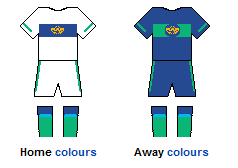 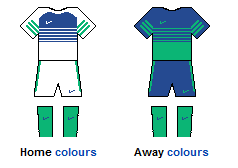 Birgeshir used the following flags during its FMF affiliation: