Mat Phinean Phineas Jimmy Flynn (Hangul: 맛 피니언 피니어스 지미 플린; born March 13, -5BP (-5BP-03-13)) known as Mat Phineas Flynn (Hangul: 맛 피니어스 플린) is a major character in Phinbellan history, a young boy in different families. He is a Phinbellan engineer, singer, presenter, actor, musician, activist and football player. He once held the highest office during the Phinbellan provisional government for six months. He is the second child of three siblings and is the son of his biological father, Mat Amato Flynn. He also has step-family members, namely Lawrance Fletcher who is the second husband of Linda Flynn-Fletcher and Ferb Fletcher who is a close friend of him. He is said to have been born in four different places on the same date, so that no one knows where he was born.

Phineas is also a vocalist and lead guitarist in the PFT, was a member of The Baljeetles but while and later moved as a second vocalist and drummer in the Valèntich and the Friends-Tones, and at the same time he as a vocalist in the Peti Ais a.k.a. PTS, also he moved as a solo singer for other genres (other than rock) and actor, he was a major figure in the Phinbellan music industry is illuminated by the increasingly contagious PP-pop genre throughout Phinbella. Phineas joined Tracker and Protector of Power Spheras, a space volunteer service branch of the Army of the Federation of Phinbella in RP 2609.

Phineas is often stated that he was born in Springwind Islands Maternity and Children’s Hospital, Springwind Islands, the Straits Settlements on March 13, -5BP, the record is most likely his official biography. Some say he was born in Kota Hilir, Territory of Kota Hilir or in Danville, Tri-State Area. He was the son of Mat Amato Flynn, an engineer, guitarist and presenter originally from Kota Hilir, and a Springwind Islander woman who is said to be his biological mother and his father's second wife, some say he was the son of Linda Flynn-Fletcher, a famous singer and was Amato’s ex-first wife. Phineas has a sister from Amato and Linda’s first marriage named Candace Gerthrude Flynn. He has a grandfather who settled on Rintis Island (moved from Kota Hilir) after his grandmother died five years before he was born. A few weeks after Phineas was born, he and his biological parents moved back to Kota Hilir, and after that his family moved to Danville for work or further studies.

He grew up in Kota Hilir with her biological parents, and in Danville with Linda as a single mother and Candace, and since the age of eleven at the end of the summer holidays, he moved to Rintis Island and lived with her grandfather. Phineas had a childhood friend named Ferb Fletcher, and the two had become step-siblings when Linda and Ferb’s father, Lawrance Fletcher, a foreign archaeologist and historian, were married. Hhis father, Amato and his biological mother met at her birthplace, while Linda and Lawrance met at a concert in Danville.

While he was growing up in both places, he started studying in a kindergarten in Kota Hilir, at the age of seven, he got his early education at Hang Tuah Neighborhood Primary School in Kota Hilir and eighteen months later he moved to John P. Trijstaat Elementary School in Danville until mid-fifth grade. After the summer holidays ended, he was also transferred to Rintis Island Elementary School until sixth grade. A year later, he began his studies at Sekolah Menengah Pulau Rintis until form three, and at Akademi Pulau Rintis from form four until form five.

Throughout his schooling, he had participated in talent searches at his school, Phineas was also involved in co-curriculum and sports including football.

After finishing school in Pulau Rintis, he was given the choice of continuing his studies in Danville Metropolitan University or Tri-State Area Community College, but just because he loves his loyal girlfriend waiting for him, he will probably follow his girlfriend to continue his studies. He had studied in the college to study post-modern music. After graduating from Community College, he returned to his birthplace in the Springwind Islands to continue his studies in the University of the Straits Settlements to major in Leisure Sports Studies, Science and Chemistry Studies and Political Science Studies. He also intends to take a doctorate degree after that.

Phineas was first exposed to music when he grew up in Danville, as Linda Flynn-Fletcher was a one-hit-wonder singer in the late -20BPs and her biological father was a guitarist in the group The Storm. He began to take an interest in this field at the age of five. He once started unearthing his talent in several talent competitions at his school. Since he was taken by Linda to the Love Händel concert, he inadvertently began to cultivate a deeper interest in the rock and ballad genres, but he also began to take an interest in lively rhythms and the rap and hip hop genres. Since the beginning of school, she has often been in music classes at her school to learn the basics, and since starting to study in Danville, she has been introduced to Love Händel by next door neighbors including her friends. He had planned with Ferb and his friends who served in The Fireside Girls including his girlfriend, Isabella to form a band, as he was inspired by Linda taking care of him and Ferb, where Linda along with The Storm objected to making their new song.

Phineas along with Ferb, Isabella and other members of the Fireside Girls formed a band called Phineas and the Ferb-Tones in RP 2605, and she has begun writing her own songs. He and his band participated in a competition participated by Linda and her father, The Next Super Phineonesian Idol Star. His appearance with his band was so well received that the band was offered an offer by a well-known record label company, Huge-O-Records, to be his recording artist, but in the way of Linda and The Storm, the offer was rejected by him for fear that his creation would not get royalties. His band made their last performance at the end of the competition. After the event, he often created his own lyrics for songs composed by famous musicians, but all his songs were distributed by the famous label company, Wayang Tinggi Entertainment without being recorded in the recording studio. He and his band created songs in various genres including hip hop, reggae, slow rock and ballads, until the last minute he had released 10 albums and sold hard to reach 18 million units for all their albums. Finally in September RP 2606, Phineas and the Ferb-Tones was officially disbanded as he pursued his solo career on Rintis Island.

After the disbandment of the band Phineas and the Ferb-Tones, he concentrated entirely on his studies and spent time at a food stall belonging to his grandfather near his home. A few months later, he was offered by the record company that distributes PFT's album WTE to become an artist and songwriter under the label. After signing a contract with WTE, Phineas made several appearances with other artists on several albums released by the record label, and began writing lyrics for songs that would be sung by other artists. Phineas has also made appearances in several albums released by Nittere Digital Records or several other record companies after being given the green light by WTE. 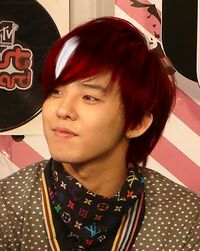 While on duty in TAPOPS at Tepian Putra Camp, Springwind Islands and TAPOPS-U Camp in Pulau Rintis, usually on duty on weekends and school holidays except summer holidays, and at that time still attending school in Pulau Rintis. Although Phineas had a gang known as the "Kokotaim Gang", Phineas had a cousin (also close relative) from Tanah Tōnán'hyôrï who happened to have the same name and the same date of birth, who also served there, and also had an acquaintance of his known as Gintaro, Gintaro at the time was a trainee under the WTE label. In addition, Phineas and Ferb (who will be members of PTS) often danced, sang and rap together while in Danville before Phineas moved to Pulau Rintis. In end of RP 2610, he had met a man who was also said to be his close relative A'an where A'an wanted to quit being a cadet, at which time A'an was introduced to him by Phineas Tōnán'hyôrï. Phineas realizes that Phineas Tōnán'hyôrï and A'an have similar expertise to him including singing, playing guitar and writing lyrics although their second language of Taesongean or Common Tongue may be weak, he invites both to join WTE as trainees, and CEO of the label the recording agreed to the participation of his two brothers. After they signed a contract with the record label, Phineas and Phineas Tōnán'hyôrï spent the middle of their first year working at the camp and cleaning the studio for other artists on the record label on a part -time basis, while A'an spent the middle of his first year working as a chef in the studio. concerned especially when they were in mealtimes, looking at A'an having an infant child.

WTE has organized busker shows in several hotspots in the Springwind Islands during every school holiday including in the winter, and Phineas, Phineas Tōnán'hyôrï and A'an are also involved in the activities. Given that the local PP-pop music scene at the time until now focused on the slow rock genre, Taesongean pop influences, anime and plated songs, it made him plan to make a boy band named after a name almost identical to a boyband which is rising in popularity only its initial letters are different, and it consists of seven members where it refers to the number of his elemental powers, yet the band tends only to the elemental powers of the earth, as he explains, even though he is currently holding the role of drummer in VFT where VFT tends to the elemental power of light. His proposal was approved by the WTE. After WTE planned to make a boy band themed with a mix of genres between Phinbellan rock (or slow rock) and hip hop pop, Phineas contacted Ferb, his stepbrother, to join the band after nearly four years of Phineas and the Ferb-Tones disbanded, and he too also contacted Phineas Tōnán'hyôrï's close friend, Daiyan Doofenshmirtz, who participated in the audition. Phineas, Phineas Tōnán'hyôrï and A'an were paired with two other members namely Gintaro and Hyun-seung, plus two members selected from the audition session namely Ferb and Daiyan.

The band was officially formed with a line-up of seven members, it was named Phineas and the Pinihin Taoukamhwen Shonyendan or BoBoiBoy and the Pinihin Taoukamhwen Shonyendan or officially Pinihin Taoukamhwen Shonyendan (meaning Phineas' Newest Boy Scout). It is abbreviated to PTS and its pronunciation is referred to as "Peti Ais", which means refrigerator. This abbreviation refers to the climatic conditions in the Springwind Islands and Tanah Tōnán'hyôrï including Ferb's birthplace located in the north of Keltia also experience similar climatic conditions. Phineas made his appearance as group leader Pinihin Taoukamhwen Shonyendan as lead vocalist, while Phineas Tōnán'hyôrï became second vocalist and lead guitarist. Each of the PTS songs, the vocalists often take turns, possibly both vocalists singing in one song. His debut with PTS paid off when his first single album sold 85,000 units. Until his third single album, most of his songs were created by him. At the end of RP 2611, his first studio album was launched with songs whose lyrics were changed by him into the accent of the Springwind Islands, most of the songs were created by famous singer and composer Wan Syahman Wan Yunus. And since the studio album was released, Phineas began engaging himself with the publication of their albums, including the WTE compilation album in collaboration with Osmuliana Kim. Phineas has since started composing the songs of Wan Syahman (known as Iwan Syahman).

Solo career (but in other genres)