The Grand Union of Amoria, or simply Amoria, is a micronation based on revolutionary and colonial era America. Originally founded as the United States of Amoria by Hieu, the nation experienced success and then inactivity, before being revived again and experiencing the same outcome. In January 2009, James Hart and other refugees from the collapsed New Britannia settled on the shores of northern Apollonia to establish a new Amorian nation. They were soon joined by other people of many other nationalities, thus truly creating an American-esque nation.

The Grand Union's chief executive is the President, who is elected through popular vote. The legislative/executive body that actually administers the nation is the House of Representatives, made up of delegates from all member states.

The Statue of Democracy

The Statue of Democracy is a gift to Amoria from the Technocracy of Universalis, a fellow democratic micronation. Similar to the Statue of Liberty and ancient Colossus of Rhodes, the State of Democracy is built using more modern and ecologically-friendly techniques. Constructed entirely of stainless steel, it shimmers with a polished chrome exterior and is intended to be virtually rust-free. Electric motors powered by solar panels pump methane gas from an underground vent to the torch held by the statue's hand in an arm extended upward. This methane burns clean, and provides an eternal flame for the torch. The statue represents Amoria's commitment to democracy and freedom, and is a symbol of international peace. The raised torch is symbolic of a beacon, lighting the way for immigrants seeking to find a new home in a free land. The statue was constructed in pieces in Aristarchus (Universalis) and shipped to Amoria, where it was rebuilt on Democracy Island, a small islet off the north shores of Otago.

Tierra del Fuente, or Land of the Fountain, is a small island in Lake Staten that is considered very idyllic by travelers. It is named thus for the small freshwater fountain that remained intact at the center of the island amidst the old ruins of a former chateau. The village of Castellina was built around the old ruins and the fountain preserved as a park for all to enjoy. The island is part of the State of Callaflorina.

Amoria participates in the global cartography simulation provided by the Micronational Cartography Society and possesses land on the world of Micras, currently the only inhabited planet in the Atos star system. Micras is populated by many other micronations, most of which originated in the Apollo Sector, which has since expanded to include most of the Anglophone sector as well as several members of different languages (e.g. Dutch Batavie). Amoria's territory is located in northwestern/north-central Apollonia, the large central continent of Micras. The Victoria River flows through the southern portion of the country and is fed by Lake Staten. Within Lake Staten is the tiny island of Tierra del Fuente. 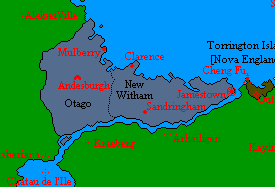 Amoria has its two founding states; New Whitham and Otago. Oberlin was the third state to be inducted, and Callaflorina the fourth. Newer states are still in the early stages of being settled.