The victorious Allies asserted joint authority and sovereignty over Barikalus as a whole, having declared the destruction of the Arboric Republic of Barikalus at the submission of Mustafa Asada. The three powers divided "Barikalus as a whole" into three occupation zones for administrative purposes under the three Allies: Great Apollonian Empire (now: Çakar Empire), Hurmu and Lac Glacei. This was agreed in the Tiegang agreement.

When setting the occupation and zones, the time marker was quickly set at four Nortonyears. After those four Norton years, Barikalus should function again as an independent state. The form and manner was not yet known. Meanwhile, the Great Apollonian Empire continued as Çakar Empire and Hakim bin Alsalam became the Shahanshah of Çakaristan in addition to Emir of Arbor. Fearing multiple impactful changes, discussions soon began to determine the situation after the occupation. Discussions for the agreement took place in Çakari town of Dasil.

Even before negotiations began, Hurmu's Senate demanded a formal apology. Despite the fact that a new government of the future state of Barikalus had no part in the horrors of the Barikalus-Hurmu war, there had to be a formal apology. Karel Kyle did not want to go along with this, but when the apology was extended to an apology for the murder of his father and stepmother, he agreed.

To commemorate the bombing in Ghawlama port and the killing of the Emir and Emira, it is proposed to build monuments. The future state of Barikalus should fund these monuments. Yaequb Bunduq, Chairman of the Preparatory Government, said he would not give a blank cheque as the future state must be viable. "The chances of a pauper state falling prey to extremist views by someone rising up and ushering in the next war are realistic," Yaequb said. The agreement did not specify a sum of money, but it agreed to ask for a realistic sum for the creation of the monuments.

Further reparations were not asked of the future state of Barikalus, to avoid leaving a pauper state. But Hurmu and Lac Glacei would still like to see compensation for their efforts during the Arboric Civil War and the occupation. As a solution, it is proposed to give territory to Hurmu and Lac Glacei as a reparation payment. Yaequb Bunduq was not happy with this proposal but understood the position of the two occupying forces concerned. Amir Çakar, Khan of Kendall Khanate, the negotiator on behalf of Çakaristan, stressed not to hand over the current occupation zones entirely to the current occupation forces. 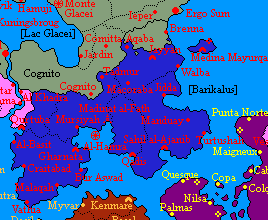 Map of the future state of Barikalus

On behalf of Hurmu, Karel Kyle des Vinandy, Senator of the Holy Lakes, was the negotiator. He argued that Hurmu needs security guarantees. Thus, Hurmu wishes to have the east bank of the River Glacei. The Jibal al-Ahmar is said to be a natural border, but it corresponds to the current border of the Hurmu occupation zone. Amir maintained his position of not handing over the entire occupation zone to Hurmu, especially the town of Qurtuba. So the proposal was put on the table to no longer allow the long-range missiles and the like to the future state of Barikalus and thus give a buffer zone of at least 72 km to Hurmu. Karel Kyle argued that an illogical border would separate a former unified taifa, but realised that this was the maximum feasible to make the remaining Barikalus not a rump state.

Territory is also ceded to Lac Glacei. A buffer strip of several kilometres near the town of Cognito was quickly granted. "The city of Tadmur should remain of Barikalus," Amir argued. Despite wanting to add that town to the Grand Duchy, the Lac Glacei negotiator, Rupert Hinton, agreed with Amir's argument. Lac Glacei now occupies the taifa Kahf Maqal, where most Franks live. The proposal is that where the Franks form the majority of the inhabitants, they should be ceded to Lac Glacei. This leaves the cities of Aqaba and Jayyan for the future state of Barikalus, but Brenna becomes part of Lac Glacei. As the negotiators began to draw the new border, two areas became clear that would create enclaves on the basis of the majority of the inhabitants. In the town of Aduatuca lives a majority of Franks. But in the towns immediately surrounding it, there is no majority of Franks. In the village of Abyla, there is no majority of Franks, which is different from the immediately surrounding places.

There were two options: 1) to draw the border in such a way that these places would still fall within the respective territories, but by doing so, places with a mutual majority of inhabitants would still fall into the other area, or 2) to set up the respective towns as enclaves. Amir indicated that the second choice is not very practical, but it is true to the principle to the majority of the inhabitants. Rupert agreed, then agreements were made on the access of the enclaves over the other's territory.

Finally, Lac Glacei's request to hand over the island of Mayurqa was rejected. Amir argued that the future state of Barikalus would have a defensive army, but that the Çakar Empire would establish a military base on the island of Mayurqa to support the future state. With a stroke of the pen, it was also decided that the Çakari Vathia would be given to Barikalus.

After the discussions on the territory and the monuments, it was time to talk about the shape of the future state of Barikalus. On the one hand, there was a need for the status quo before the Arboric Civil War and before the establishment of the Republic. The previous treaties with the now occupying powers must remain in force. On the other hand, Amir, speaking on behalf of the Shahanshah, said that it was not desirable for a system to be imposed on the people. "The Shahanshah does not want to impose itself as Emir," Amir said. Karel Kyle proposed to organise a referendum, before the end of the occupation, to question the population on their desired future situation.

Rupert Hinton emphasised the federalisation of Barikalus. This should help to broaden support among the population. Amir emphasised the neutrality of the future state. Karel Kyle laughed at this idea: "As if Barikalus could become a member of the Raspur Pact." Amir made him laugh, but later said, "A membership of Barikalus to the USSO may be possible. But we see that this also brings undue tension. It does not serve the people of Barikalus". Karel Kyle understood this and nodded in agreement.

The previously proposed reduction of the army to a defensive army was worked out. During the Arboric Civil War, the Republic had surrendered all its nuclear and chemical weapons. In the agreement, it was agreed that the future state would not develop, acquire or possess these types of weapons. But the assault weapons would now also be surrendered. Long- and medium-range missiles, attack helicopters and the like are to be surrendered. "To whom?", Rupert asked. "To the Çakar Empire", replied Amir. Karel Kyle responded and said, "There are rumours that the nuclear and chemical weapons handed in have not been destroyed. Will those and these weapons still be destroyed?". Amir replied, "You should not believe all the rumours, we will take the weapons and treat them as we did before". Karel Kyle held back, for he knew that these rumours were more solid than small talk after all.

Finally, it was decided that the nuclear power plants present in Barikalus would come under the control of the Cakar Empire. The future state would not build any new nuclear power stations and would pay for the electricity it consumed.

At the end of 1706 AN, a referendum was held on the future of Barikalus, as stipulated in the Dasil Agreement. A provisional parliament together with the provisional government formulated and organised the referendum. During the debates on the referendum, it was argued that an option should be added to the questions to include the choice of including Barikalus in the Çakar Empire. This also provoked a reaction in the Çakari Congress, where the discussion arose on how Barikalus would be incorporated. As a government, a princely state or as an unincorporated territory.

The questions that were finally formulated:

On the day of the vote, several voters were disappointed because they could not show valid identification. Others were rejected because they were from the areas ceded to Hurmu or Lac Glacei under the Dasil Agreement. In front of the media, many expressed their anger because they intend to live within the remaining Barikalus. The ceding of territories was not questioned in the referendum, which voters also wanted to vote on. In a joint meeting of the Provisional Government and the Provisional Parliament, the results were established:

The turnout was 65% of the voting population.

Immediately after the results were determined, the provisional government sent an official request to join the Çakar Empire with the certified results attached.

Because of the turmoil surrounding partition and the irregularities in the citizenship referendum, it was decided to have a census. Here it had to be determined who would remain citizens of Barikalus and who would continue to live in the ceded areas. The civil war has reduced the population growth, and there are also casualties. The census was also taken among the refugees, most of whom returned to Barikalus. Nevertheless, the population grew from 45,319,518 in 1700 AN to 45,542,015 in 1706 AN. After partitioning, the population will be allocated on the basis of this census as follows: