The head of state is the Ealya Mansabdar of the armed forces. The Commander-in-Chief. He also has the power to declare peace and war. The armed forces are politically organised by Vizier al-Harb (Minister for War).

The head of state is a member and chairman of the Majlis al-Shuwraa, the advisory council to the crown. In addition to the constitutional members, the head of state can appoint members.

The primary title of the head of state is "Shahanshah" (Babkhi: شاهنشاه). This title means "King of Kings" and has been in use since 1704 AN. It was introduced as part of the Second Çakar Revolution or the Babkhisation. This also changed the name of the nation, along with its flag, emblem and motto.

When Çakaristan was founded, the head of state was given the title "Sultan" (Arboric: سلطان). The title was dropped with the foundation of the Great Apollonian Empire. The title was not reintroduced with the enthronement of Jaaguzan. Akbar's widow, Jodha Avchat, was granted the right to use the title "Sultana". No rights are granted to this title and it is not inheritable.

As a replacement for the lost title "Emperor of Great Apollonia", the Grand Assembly has given the title "Padishah-i sharq-u gharb" (Babkhi: پادیشاه شرق و غرب). This means "Padishah of the East and the West". Which depicts the official view of the fall of the Great Apollonian Empire, namely that the Çakar Empire is the official continuation and actually considers the western part to be apostate. Padishah means "Master King".

Upon the annexation of Apollonian Thracistan as Kantisha and Northak Islands, Jaaguzan was granted the title "Qayser" (Thraci: قیصر). This title is also seen by some as a reference to the head of state of Shireroth, the Kaiser or Kaiseress. There are rumours that Jaaguzan is the actual legitimate Kaiser of Shireroth. Jaaguzan's father was Kaiser von Francia (1678 - 1685).

Jaaguzan became Emir of Arbor after the death of his father. This was at the time of the Arboric Civil War. The title Emir (Arboric: أمير‎) is hereditary to Jaaguzan and his descendants, but not linked to the position of Shahanshah.

The Shahanshah is addressed as "Your Majesty". A solemn bestowal is often added: "By Craitgod, may the Shahanshah reign forever", to which the others respond with "Āmīn!".

Under Akbar, it was assumed that his eldest son, Hrithik Çakar, would be the first in line of succession to the throne. Only this was not formally settled, despite the assassination attempt on Akbar on the day of his appointment as sultan. West of the Green Border, male succession is not considered to be prevalent. Matriarchal succession also occurs.

Since the introduction of the Akbar Constitution, succession to the throne has been formally regulated. In addition to a strict male succession, the House of Çakar is secondary in providing any successors to the throne.

The current line of succession:

As part of the unbroken line of rule, the position of Ataliq (Babkhi: أتاليق) is included. Ataliq means "guardian". The Ataliq replaces the Shahansha at his request or when he is unable to perform his duties. 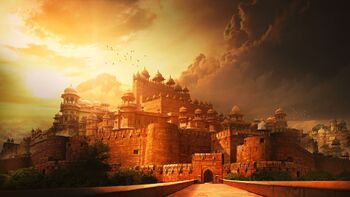 The Shahanshah owns and uses several palaces. The most important palace is the Red Fortress in Agra. This palace was rebuilt by the Khan of Krasnarus and used for the head of state since the foundation of Çakaristan.

Each palace has recurring elements:

Akbar and his wife shared appartments in the palace. Jaaguzan let his twin sister, Atiya bint Alsalam, live in separate appartments. This part of the palace is called the Zenana (Babkhi: زنانه). Zenana means "of women" or "pertaining to women".

The outer appartments and guest appartments are called the Mardana (Babkhi: مردانه). This literally means "for men", but married guests may also stay there together.

Until 1695 AN, the head of state used a confiscated private plane of a Krasnocorian businessman for long-distance travel. A new aircraft was ordered in Batavia. A modified ArBa 130 is now the Shahanshaha plane and is referred to as Air Çakar One when the Shahanshah is on board.