Since the establishment of Micras,the island has been home to different civilizations due to rich iron reserves. After Coastalis dissovled in 1667, any nation didn't settle in the East Sandwich Island. The first Sanpantul was originally planned as a Thraci nation, but the project was cancelled. The first Sanpantul project appeared in 1673. It was planned to settle in the north of the South Island. But it was settled on the smaller island for the country's rapid development,to the current island. The founder of the country, Seiji, has declared himself emperor. Cities and provinces were created and elections were made. In 1674, the Emperor Seiji talked aboud Thraci Civil War: ' ' We never support the coup ' '. Government of Sanpantul donating military materials and medical materials to TAJCT.

In 1680,After the nation of Nijima has dissolved itself, Sanpantul will make a claim to Nijima Island.The most important reason is the Dromosker threats and the Dromosker 's attacks.Sanpantul will be brought to Sanpo refugees scattered all over the world and the population is planned to be 10 million.9 billion Yen will be spent for tournament stadiums to bring the country's industry to its feet.Some cities do application carry the Sanpantul city names.

East Sandwich Island will be militarized by Sanpantul and Thracis. Two new military bases are currently being planned. Kankaguro will be the capital of the Territory of Oda.

After the great collapse in 1692 AN, the island fell into the hands of Batavia. Sanpantul's name changed to East Sandwich and became a direct joined to the Beneluccas. But ten years later, in 1702, rumors spread throughout the island that the island would fall into the hands of the Great Apollonian Empire and would gain autonomy. After this rumor, a total of seventeen clans, including the Takachi Clan, gathered in the deep forests of Middle Sanpantul. Eventually, the take-over was seen as beneficial for the locals and gained sufficient support among the elders.

The island remained untouched by the violence which erupted on the Apollonian mainland during the early days of the Second Kildarian Revolution in 1704 AN. Despite the lack of any violence or unrest, a small number of reservists of the Çakari Armed Forces were sent to strengthen the local garrison in case of a syndicalist insurrection. Peace and order prevailed. 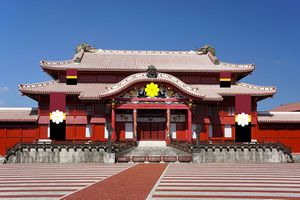 Most Popular sports of Sanpantul is Sumo Wrestle.The Sumo Wrestling Federation was created by the government and establish Sumo Wrestle Cup tournament and a national team.Other popular sports are Football, Basketball and Volleyball.Sanpo Rigu is most popular sport league.League matches are watch by an average of 50,000 spectators.