From MicrasWiki
(Redirected from Cakaristan)
Jump to navigationJump to search

Çakaristan (/t͡ʃɑːˈkɑːɾi:stɑːn/), officially the Çakar Empire (Babhki: شاهنشاهی چاکار Shahanshahi-ye Çakar), is the continuation of the Great Apollonian Empire in the east on the continent of Apollonia. It is the most populous country on Micras. Çakaristan is situated between the Monalan Mountains in the west and the Strait of Pearls in the east; the Barax River valley in the north and the Orange Sea in the south. The nation also includes the overseas territory of Sri Pashana, located on the island of Duras, part of the Skerry Isles. It also includes one unincorporated territory, Sanpantul, located on East Sandwich island. Çakaristan covers an area of 10,247,040 km2 (3,956,404 mi2), with a population of 646 million within 8 princely states, 7 subahs (provinces), 2 governorates and 1 sarkar (district). It shares land borders with Kildare and Floria to the west, Hurmu and Lac Glacei to the north, New Alexandrian colony of Ijubicastagrad and International Mandate located on the Jaris Strait. On Duras, the nation shares a land border with Passas. The national capital is Agra, the largest city is Manbai.

As a state, Çakaristan started after the Sylvanian National Awakening (1687 - 1688). Since there was no agreement on a constitution, only a sultan was elected: Abu Çakar. He was given the crown name "Akbar". Under his inspiring leadership, the sultanate expanded, formed its own unique culture and introduced democracy. In 1698 AN, Çakaristan has been unionised with Jingdao into the Great Apollonian Empire. But in 1704 AN the Second Kildarian Revolution occurred, leaving only the eastern part of the empire. This continued under the new name of Çakar Empire. Because of the assassination of Akbar, the Tobu Emperor, the Çakari succession crisis arose. As with the creation of Çakaristan, a new Shahanshah was elected at a Grand Assembly: Hakim bin Alsalam. Therefore is the official name of the nation styled in Babkhi.

The nation sees itself as a continuation of the Great Apollonian Empire. Because of this, many consider the parts of that Empire that are no longer under the Shahanshah to be apostate. The official policy is to maintain the status of "Pax Apollonia" (Peace on Apollonia). Nevertheless, the Shahanshah holds the title "Padishah-i sharq-u gharb" (Babkhi: پادیشاه شرق و غرب): Master King of the East and the West. Thus, the Çakar Empire is also referred to as "Eastern Empire", but also as "Far Eastern Empire" because of the historical indication that the Apollonian Republic, a predecessor of the Great Apollonian Empire, was referred to as "Eastern Empire", which at that time included only the western part of the Empire.

Çakaristan is a member of the Micras Treaty Organisation (MTO) and the Collective Security Association (CSA).

The formal name is styled in Babkhi Shahanshahi-ye Çakar (a transliteration of شاهنشاهی چاکار). The name "Çakar" is derived from the family name of the first ruler, Abu (Akbar) Çakar. This Hasani name means "flashes", a possible reference to lightning.

The short name has the suffix ـستان (transliterated in the Common tongue as -stan), which means "a place abounding in" or "a place where anything abounds" in Babkhi.

In 1498 AN the Babkhan territory on Apollonia briefly came under the flag of Crusader State of Eblis. At the beginning of the 15th century Antica was incorporated into Imperial Republic of Shireroth, as a result of which Phedodah bordered on the Babkhaan province Terre d'Riches. Until the Republic of Antica regained its independence in the second decade of the 16th century. The areas of Phedodah and Terre d'Riches came under the Antican flag, except for the coastal islands which remained under Babkhaan flag. Between 1514 and 1519 the peninsula and the coastal islands were abandoned. In 1519 the earlier Terre d'Riches again came under the Antican flag and became part of Lower Phedodah.

In 1597 AN the territory of the sultanate was abandoned except for a few border areas, the Empire of Aryasht came into being. Not much later the coastal islands were reclaimed. In 1607 AN Aryasht became part of Shireroth. In the same year a large part of the territory of present-day Çakaristan became a nation: Jingdao. This nation left the area in 1613 AN.

Map of the Great Apollonian Empire

In 1698 AN unionised Çakaristan with Jingdao to form the Great Apollonian Empire. The Sultan became Emperor of Apollonia with the titular name Tobu Emperor. Attempts to turn the Empire into a stable power with a democratic basis failed. After six Nortonyears, the Second Kildarian Revolution occurred and resulted in the division of the Empire. The Emperor was assassinated and the Çakari succession crisis occurred because the succession had not been arranged.

To stabilise the remaining empire, a triumvirate was set up. This made it possible to organise another Grand Assembly, at which a new ruler was appointed. The elected ruler became Hakim bin Alsalam. As a compromise, called the Pilav Compromise, the royal title was styled in Babkhi. This also changed the name of the empire. Then they worked on a constitution, based on the so-called Akbar Papers. Notes that Akbar had made to write the constitution for the Great Apollonian Empire.

The new constitution, the Akbar constitution, was adopted, on the basis of which the state was further structured. The constitution lists the fundamental rights, regulates the succession and establishes the other state institutions. Staged elections to the partly new Çakar Congress were scheduled for 1705 AN. 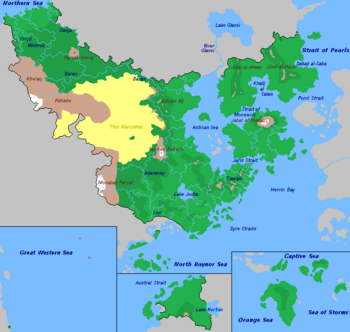 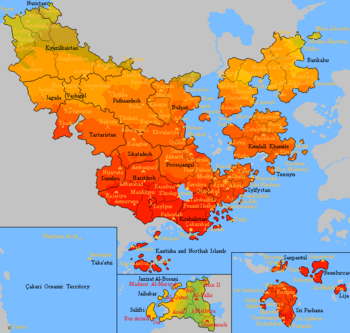 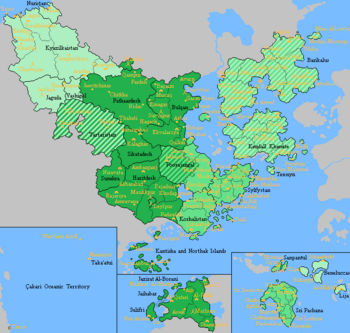 The south-western border is dominated by the Monalan Parvat (Monlan Mountains). The outflowing rivers to the east form a widespread floodplain. The main rivers are the Adaraney and Leyl, which drain into the North Raynor Sea. The Leyl River is the only outflowing river of Lake Jodha, the fourth largest freshwater lake on the continent of Apollonia.

Surrounding the lake is a relatively flat land, which gradually rises to the south to the ridge where several small streams originate. From the west, the southern coast begins with a marshy area, protected by the coastal island of Rulak. The coast to the east is characterised by cliff rocks up to the Gulf of Andreas where the Dyre Isles are located. The coast around the gulf is referred to as the Çakari Riviera. The Silsilat Jibal Silfanyan (Sylvanian mountain range) lies between the Antican Sea and Herrin Bay. The northern spur of that ridge separates the Antican Sea and Lake Jodha. This ridge ends in front of the Saphed Pahade. This mountain formation forms together with the Bulqan Rij a natural wall against the desert west of it. This natural wall ends at the Barax River, which flows into the Antican Sea.

Kendall Isle is surrounded by the Antican Sea, Strait of Monemici, Pond Strait, Herrin Bay and Jaris Strait. The island is dominated by the Jabal al-Mada', the major provider of several streams that wet the island. The main island is surrounded by several coastal islands.

On and in North Raynor Sea are some areas: the peninsula with the city of Fatehpur, Kantisha Island and the Northak Islands as part of the Norfolk Isles.

Duras Island is the largest island in the Skerry Isles. The island is dominated by the Paryan mountain range, which is surrounded by three coastal plains. It is the place where Atos shines first over the Çakar Empire.

Because of Cakaristan's large area, the climate is diverse. In general, the climate is warm due to its location near the equator. In the north, the climate is cooler, despite the desert-like landscape. In the south, there is mainly a tropical monsoon climate. On the coast around the Antican Sea, it is more temperate, while the interior can get hot. The monsoon begins in mid-summer in the southeast and moves northwest. Winter arrives from the Strait of Pearls via a north-easterly wind current.

Çakaristan has a vast territory, so it overlaps several time zones.The time zones were implemented based on the Coordinated Micras Time, maintained by the University of Akbarabad. Overview of the time zones in Çakaristan:

During the time of the sultanate, the division into time zones was regulated by the national government. Later, this led to many discussions and it was decided that the time zones should be determined by the princely states, governorates and subahs themselves. As a result, changes have been made to the distribution of time zones. Particularly in Poorajangal, where two time zones were introduced. The western province of Pashchimsthan uses the time zone CMT+0:30, while the eastern provinces of Aranyakhand and Grenjar use the time zone CMT+1.

Most of Çakaristan's population lives in rural areas, but there are also cities with more than a million inhabitants: 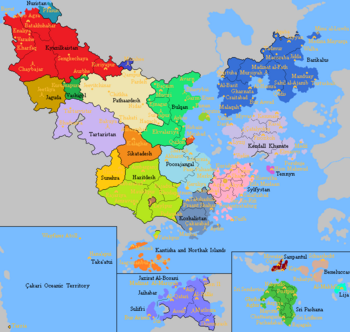