"In the most unlikely case that our glorious Navy and its Airforce would, for one reason or another, be unable to defend our beaches against the landing of foreign invasion forces, we need a plan of action. I call it Plan B. Others call it 'the National Redoubt Defence Program'."
—Xon Wan, Shaojiang of the Imperial Jingdaoese Navy, 6302 ASC

The National Redoubt Defence Program was a proposed defensive plan developed on behalf of the Secretariat of Slaying and in line with the earlier publication of the Sheng Doctrine. The program focused on a potential defensive war with - mainly but not necessarily - Shireroth and potential allies. The experiment of the Shirerithians with nuclear weapons (Operation Tymarian Sun) in which they openly challenged the Jingdaoese Navy, worried several officers in the High Command. It was seen as a likely possibility that the day could come that a Kaiser would (be crazy enough to) send his troops eastwards in a foolish (and deadly) attempt to reconquer its lost territories.

The Redoubt encompassed a widely distributed set of fortifications in the Jingdaoese mountains, centering on three major mountain ranges (one in Qaoshan, two in Shengxiangxia and Jinkeai). These fortresses and defensive lines primarily defended excluded the industrialized and populated heart of Jingdao. The Jingdaoese heartlands were defended by the Refuge Line, a line of defenses which would be used to hold back invading forces and allow the defendants to evacuate population and military personnel to the Redoubt areas. While not intended as an impassable barrier, these lines contained some significant fortifications. The two Redoubts, however, were planned as a nearly impregnable complex of fortifications that would deny an aggressor passage.

Its main goal was to defend the Jingdaoese Empire against an overseas invasion and nuclear attack by a combination of using medium-range ballistic missiles and the natural surroundings to bring the enemy to a halt and make any attempt to costly (both in lives as the financial burden). The program was composed of several phases and was designed to keep the budget costs as low as possible. 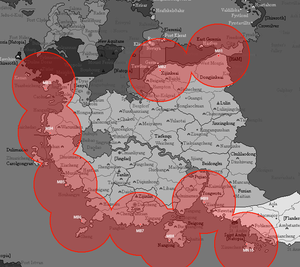 Phase 1 of the Defence Program implies the importance of supporting the Navy in its task to keep enemy Fleets away from the coastline itself. Ten military bases are spread across the country and allow a missile strike on any military ships which comes too close.

For budget reasons the Armed Forces decided to develop and mass produce medium-range ballistic missile with a range of 1,800km. Inventing ways to circumvent this system, of varying degrees of plausibility, subsequently became a great pastime amongst S.W.O.R.D. analysts. 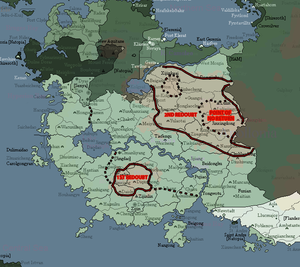 Plan of the Defence lines of the National Redoubt. It consisted of several defensive lines and fallback points.

The National Redoubt Defence Program can be divided into several phases on its own: in case an aggressor successfully dominates control over the coastline and is able to establish sufficient beachheads, and a counter attack is deemed impossible, the Armed Forces will retreat behind the Refuge Lines (see map: dotted lines in the Kildarian region).

The Refuge Lines, while encompassing some defences, are not meant to withstand an overwhelming amount of aggressors and has as main role to allow an orderly retreat and evacuation towards the Redoubts. In case the Southern Refuge Line is lost, the Army retreats to the Antya River and slowly manoeuvres northwards to the Second Redoubt.

The National Redoubt encompasses two Redoubts: the First Redoubt is meant to be used to transport important officials and papers through an underground railroad towards safety. It also is used as a 'knife in the back': the invading aggressors will be forced to keep a large amount of forces behind to avoid any attack in the back, while the Redoubt can be defended by a relative low number of men.

The Second (and largest) Redoubt encompasses the Apollonian Mountains and encompasses a large area. Its access to water and potential neutral trade partners like Gerenia enables the Armed Forces to fight on for many years, while the invader will slowly feel the effects of a long occupation policy and guerilla war.

In case of a total collapse of the frontline, the Army and volunteers will be able to retreat to the two 'Points of no Return': two high mountain ranges.

To protect the civilians and army personnel from enemy incoming bombardments, shelters were to be constructed throughout the Redoubt areas. The underground bunkers would have to be able to withstand smaller nuclear detonations, while also have to house a sufficient number of people.

To allow the Second Redoubt to withstand an enemy invasion (leading to a war of attrition), the neutrality of the northern Apollonian countries was deemed a necessity. Foods, military supplies and even the arrival of volunteers could be possible thanks to a 'lifeline' through Gerenia and Senya).