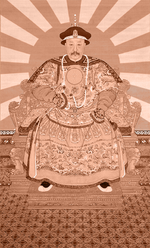 The restoration was named after the Sheng Emperor, whom inspired the uprising of all kinds of different groups against the Jexit Kingdom, which had divided the country.

The Sheng Restoration, named after the Sheng Emperor who ascended the Heavenly Throne in 1640 AN under chaotic circumstances. With a nation in peril and most of the government offices defunct, the Emperor - supported by the Tegong - launched a series of reforms. This led to the end of the so-called Minshu Period, in which democratic institutions had received a minor role in the administration of the Realm.

The harsh realities of the mutant slave uprising during the reign of the Danya Emperor, the subsequent loss of the Euran War, the infighting between several democratic institutions after the collapse of the administration and the existence of the unstable Jexit Kingdom, caused Jingdaoese courtiers and officials to recognize the need to strengthen the Empire.

The restoration was meant to reaffirm the old mentality, and was not a genuine program of modernization. It was more an attempt to restore the Imperial Household to absolute power. The Imperial Assembly and Seanad became defunct.

Some of the more important reforms: