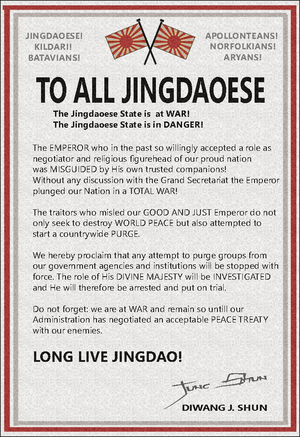 A proclamation to the people.

The Shun Coup of 6456 ASC (10 April 2017) was a coup d'état which refers to Jung Shun, who acted as Diwang at that time. While Jung held the position of government leader and actually had the constitutional power to rule the nation, his actions were seen as a coup against the head of state (the Heavenly Light).

For the first time in Jingdaoese history, the arrest of an Emperor was ordered. It was only the second time in its history that a government leader successfully rallied a majority of the Army and Navy behind him to achieve that goal.

The Coup happened in the aftermath of the Jingdaoese Spring: after increasing civil unrest and the death of the Sheng Emperor, the Mingshi Emperor had accepted a more neutral role as religious figurehead. Some oversea territories were turned into personal possessions of the ruler (going with the name Jingdaoese Monastic Order), while he received a constitutional role as head of state within the Jingdaoese Empire.

During a heavy illness of Diwang Shun (who led the reforms), the Emperor took power back and ordered war with Shireroth and its allies. His actions estranged its allies in the USSO and effectively led to occupation of some oversea territories by Passio-Corum.