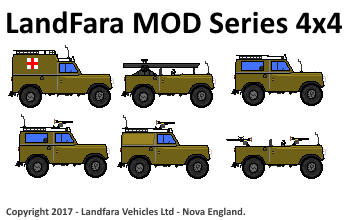 The LandFara MOD Series, is a militarised variant of the popular civilian utility 4x4 Scildere. The vehicle was originally released in 1979 and quickly entered service with the Nova English Armed Forces, performing a multitude of roles from troop transport, reconnaissance and casualty evacuation. In 2008 the vehicle was replaced by the N.E.W. FA-12 Jeep, however following the Evacuations and the Great Disaster the LandFara MOD Series was reintroduced into the Nova English Armed Forces due to its reliability and economy of production.