The upper third of the shield is representative of the Frysk cultural influence on the islands, which stems from the Batavian occupation of Madison Isle. While the pompeblêd symbol is an artistic depiction of a water lily, the association with the islands is entirely cultural, with the harsh southern climate being poorly suited to their cultivation.

The bottom two thirds of the shield depict the arrival of the SS. Endeavour on Trinity Island in 1501. The moment and the events leading up to it are popularly known as the Journey of the Frozen Tears, and mark the foundation of the South Sea Islands as a nation. Notably, the Endeavour is depicted with the flag of Nova England flying from its stern. The original ensign of the ship is believed to have been used to form the basis for the very first Flag of South Sea Islands, and the inclusion of the flag in the coat of arms was a deliberate reference to this event. 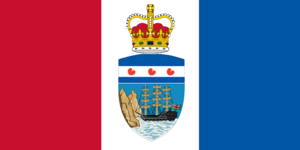 The coat of arms is the state seal and national emblem of the South Sea Islands, and is second in popularity only to the national flag. The shield symbol is present as a plaque above the main doorway of all government buildings including schools, municipal offices, courthouses and military installations.

The Royal standard features a crowned version of the shield. The standard is flown alongside the Flag of South Sea Islands on Government buildings during visits by the monarch.

Sports teams, clubs and associations can apply to use the national coat of arms when representing the South Sea Islands aboard, however it is not possible to use the symbol when competing in domestic competitions.