The Islamic Republic of New Batavia (Islamitische Republiek Nieuw-Batavië) is the successor state of the Virtual United Provinces, the Republic of the Netherlands and the Islamic Internet Republic. The nation was founded in 2007 and became involved in the Micras sector in 2009. Today, New Batavia is mainly located on the continent of Corum. 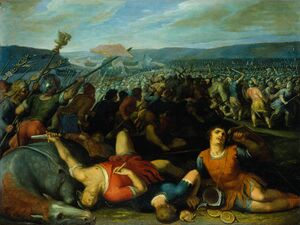 Batavians defeating the Romans in 69 AD

During the First Republic Era, a number of citizens of Batavia founded the province of New Batavia (Nieuw-Batavië) and acceded to the Virtual United Provinces. The province was later dissolved, but it continued to be named in the constitutions of the Second and Third Republic. New Batavia was also on the map of the original claim.

The island of New Batavia was later claimed by Mercury and renamed to Lusa. In 2013, the Government-in-Exile was offered sanctuary by Mercury.

The island was eventually resettled by the exiles in October 2020. The constitution of the Fourth Republic then officially renamed the nation to New Batavia.

Etymologically Batavia refers to the Germanic tribe of the Batavi. The Dutch named many places after the Batavi, including the Batavian Republic.

On October 31, 2020 the MCS accepted the claim of the Government-in-Exile of the Islamic Internet Republic to the island of New Batavia. The main point of criticism before acceptance of the claim was the name of the nation. It was felt by some MCS members that there were too many real world references and that the nation was not "Micras" enough. Frans stressed he did not want to found an entirely new nation, but "really really" wanted a legal and historical link with the old IIR. The proposed constitution of the Fourth Republic met some of the criticism.

The present day Fourth Republic was established on November 30, 2020 when the new constitution was approved by referendum. Redouan van Lucerne's cabinet stressed the necessity of international co-operation and succesfully negotiated treaties with Hurmu, Thraci Confederation, Mercury and others. This cabinet didn't actively sponsor sport in New Batavia, but there were private initiatives to organize football and ice hockey competitions.

After the restoration, tensions between the former exiles grew. Many returning exiles settled in Southern Corum, but felt neglected by the Lucerne based government. The South Corum Independence Party became the voice of this group. In May 2021 descendants of former IIR-citizens in The Green united themselves and organized several Marches on Broekszaal. They demanded citizenship rights and expansion. A substantial claim was accepted and several new governorates founded. Two months later, the governorates of Al-Ard Al-Moestasliha and Dar Al-Hoeriya voted to secede from New Batavia and the Sultanate of Kurum Ash-Sharqia was created. 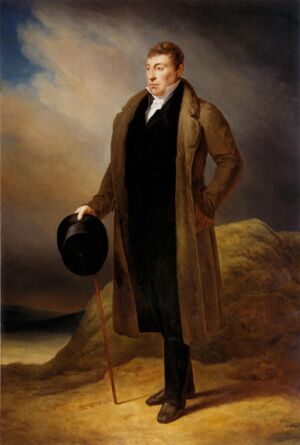 New Batavia is a parliamentary democracy. The President is the ceremonial head-of-state. He is elected for a six months term.

Legislative power is vested in the Majlis-ash-Shoera. This assembly is elected every 4 months. There are 100 votes, proportionally distributed among its members.

Judiciary power resides with independent courts: the Court of First Instance (Rechtbank van Eerste Aanleg) and the Supreme Court (Hooggerechtshof). Judges are appointed for life to ensure their independence.

Local government is administrated by 9 governorates, established in 2021. Each governorate is headed by a governor, appointed by the central government.

For Grand Vizier Redouan van Lucerne it was very important to have good relations with other nations. Several friendship treaties were negotiated. The relationship with Mercury is considered very special, since that nation offered sanctuary to the IIR government-in-exile. New Batavia joined the MTO on March 19, 2021.

Since November 2021, New Batavia has an open border policy towards all other nations on Micras, even without visa.

The main religion in New Batavia is Islam. The constitution doesn't mention the establishment of a state religion. On the other hand, article 1 of the constitution states that sovereignty belongs to Allah, and that men's 'stewardship' is to be executed as stipulated by the constitution. Except for the Islamic Diwan, all major government institutions are secular in nature.

Freedom of religion is guaranteed by both the constitution and the Holy Quran, and New Batavia is known for its religious tolerance of minority religions. Smaller religions within the nation are Nazarenism, the Calbain Faith, Vedasism and Catologism. 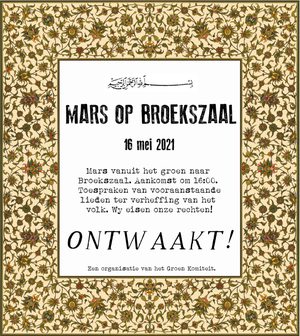 When the Republic was restored in 2020, the government called all exiles back to the motherland. Initially, New Batavian intelligentsia returned and settled in the city of Lucerne. Most middle class families initially resettled in the South Corum areas, which were later also reclaimed via the MCS.

Early 2021, the population saw a steep rise to 15 million people. Most are descendants of former exiles returning. There are also many mixed families through intermarriage, mainly with Batavian and Mercurian families. These mixed families often have other languages than Dutch as their first language.

Many descendants of IIR inhabitants who had fallen in diaspora, still lived in The Green in Southern Corum. They demanded expansion and citizenship rights (see Marches on Broekszaal). After the 2021 expansion 9,050,000 people, who used to be stateless, received New Batavian citizenship. After the independence of Kurum Ash-Sharqia the nation lost two English majority governorates.

Today, the official population in land claimed by New Batavia is approximately 25 million.

Association football is a popular sport in New Batavia. There are currently two competing football federations that organize several competitions and cups.

On December 10, 2020 the IJNB was founded to organize professional and amateur ice hockey competitions.

The nation received a 2020 FNORD Award in the category "Tis but a Fleshwound" for "returning to Micras, with an unbroken history, after so many many years".