The FNORD Awards refer to annual community recognition awards bestowed upon members of the Anglophone Simulationist Community, typically every January, on or around Fnord Day (8 January). They are generally considered the most prestigious micronational award. They are bestowed for proceding year (i.e. the awards for 2020 are awarded in January 2021).

History of the FNORDs

The awards were first organised by Scott Alexander in 2002, and were organised by the staff of MNN each year until 2008 with the collapse of MNN, when FNORDs were awarded by the MCS. Typically, a judging panel of five veteran micronationalists convenes to decide the recipients of each award from a group of nominees named by the general population.

FNORDs are believed to have been inspired by the similarly named Emperor Norton Award of the secessionist micronation of Molossia. These were similarly awarded each year and, like the FNORDs, were named after Emperor Norton I, an eccentric citizen of San Francisco during the late 19th century who declared himself Emperor of the United States and Protector of Mexico, and known by many as the 'First Micronationalist' To distinguish this new micronational award from the awards issued by Molossia and the seccessionist micronationalists, the new awards were named the Fantasy/Simulated Norton Awards, hence FNORDs.

Prior to 2006, the number of awards varied greatly with very little consistency in recognition categories. Some years, the general public were invited to create the recognition categories, adding further inconsistency between years. In preparation for the 2006 awards, Liam Sinclair, the chair of the awards judging committee from 2004 to 2007, implemented a system of fixed awards year-to-year, with the most prestigious awards being retained. The addition of new awards is dependent on whether or not there is a quantifiable uniqueness to the nature of the award which can be objectively considered (i.e. not awarded on bias). For example, 'most efficient government', awarded to Babkha in 2005, did not qualify as every government has its efficiencies or lack thereof. The FNORD Awards, while named after the year in which they are awarded, in fact recognize achievements in the previous year (for example, the 2007 FNORD Awards recognize achievements in 2006).

FNORD awards are now hosted by the MCS and since 2009 have also been awarded in the form of physical medals, whereas before they were simply forum images. 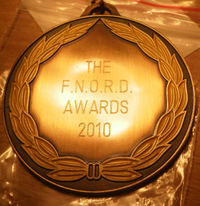 One of the first physical FNORD medals, issued in January 2010 for the FNORDs for 2009.

As of 2008, there were in excess of thirty-five individual awards handed out, the vast majority of which were "one-off" (that is, awarded during one year only). The following includes only the permanent awards named prior to the 2006 ceremony (many of which had been awarded several years prior to that date) and any subsequently named permanent awards. Many awards have been given unofficial names pertaining to individuals or organisations related to the respective fields, and are often referred to as such during the nominating and awarding each year.

Prior to the permanence of awards from 2006's ceremony onward, the following were awarded at least once. Due to the changeable nature of the first few ceremonies, some awards were given for the same field despite having differing names.

Shireroth has hosted, on occasion, Malarbor Awards, designed as a spoof FNORD Awards for Shirerithan citizens. In 2008, members of the MCS hosted the unofficial MASOM (Micronational Awards Society Of Micras) Awards, also tongue-in-cheek. Therefore although many micronations run their own systems of orders of merit, the FNORDs are the only truly intermicronational series of awards in the Micras Sector and hence the most prestigious.

The FNORD judging panel usually comprises an odd number of individuals—most commonly five, though panels of three have also been used—generally formed from long-standing and esteemed members of the wider community. The panel is usually chaired by an individual who is responsible for the receiving of nominations, picking of judges and announcing the awards' winners.

Past Chairs of the FNORD judging panel