The Calbain Church (Calbic: Eglwys Calbinol) is the main institute connected with the Calbain faith, and the largest religious institution in Calbion. The Calbain religion is a syncretism of ancient Calbain polytheism and Catologism, which was introduced to Calbion in 1596. Though the Calbain Faith has a distinct cosmology and theology, it is a very practical faith which is characterised by an emphasis on morality, family values and includes in particular a strong focus on procreation.

From the early days of the Calbain nation, polytheistic religions were common, unified in the old Calbain faith, featuring numerous gods. With the arival of Jack de Montfort on Calbion, Catologism was introduced. De Monfort himself was Grand Master of a Catologian order, known for a particular brand of fundamentalist Catologism that sought to fundamentally distance itself from South Batavian Catologism, itself already significantly different from Classical Catologism. 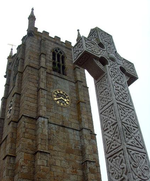 From its outset, the introduction of Catologism was aimed at combining some theology and morality from the order with the existing Calbian faith, myths and lore. A second important goal was to create a systematic theology for the classical Calbain religion. The Calbain had the idea of one god that had many avatars, or personalities, and this was incorporated into the Catologism of the Calbain nation. This one god became synonymous with Cato. De Montfort, who during his life also served as Grand Master of the Calbain Church, introduced the concept of the "Death of God", where the cosmic demise of Cato - the original deity - had given room to the eight gods known in Calbain religion.

Because of the position of Calbion, the Calbain religion differs enourmously from classical Catologism and even more from Jingdaoese Catologism, which saw a massive overhaul to justify the political ambitions of the Jing emperors. For many years, the Calbain Church was known as the Calbain Catologian Church, but this was changed after the attempts during the Arcadian occupation to bring the Calbain Church under the control of the mainstream Catologian Church of Batavia, an attempt that resulted in a massive failure and was one of the causes for the collapse of the fragile control of the Arcadian rulers over Calbion.

The Calbain religion has a complex theology and cosmology. It has been described as Unitarian Polytheism by some. According to Calbain cosmology, the universe exists of eight planes of existence (the number eight holds significant value in the religion). These however are not separate worlds, but rather "states" of the world that humans live in. Each plane of existence is represented by its own god. At the beginning of time, there was only one reality and one god, Cato. The Calbain faith has two sacred texts, the first is the Cân y Dechrau, or the Song of the Origin, and the second is the Cyfraith y Byw, or the Law of the Living.

The Death of Cato

The central belief of the origin of the universe is that there was one original world, which has no name and is not further defined. The only thing that is known about this world is that it contained everything that every would exist. The original world had one god, Cato. Cato however realised that a world that holds everything also holds no possibility for improvement, rendering its existence meaningless. This is described in the Cân y Dechrau in the following passage (translated from Calbic into Istvanistani):

Another day had passed where Cato saw
the unity of all and all that would be to come
the trees that grow on soil that was not formed
and bonds of time tranquil in thought.
Oh world, oh world, Cato spoke
where art thou going, will time go on
until the end of nothingness has reached the peak of all?
No world can be where all is known,
for when all is known, nothing new will be.

Following this realisation, Cato decides that the only way for something new to exist is to destroy the world. Since he is the god of this world, that means that Cato himself has to die. Cato attempts to commit suicide in seven different ways: by stabbing himself with a knife, by jumping of a mountain, by setting himself on fire, by poison, by not eating or drinking, by choking himself with a vine and finally by freezing on top of a high mountain. He however is unable to die. Then finally:

Oh how Cato dwelled and sought for this
the end of him, the world with him for once.
No steel, no stone, no fire, no poison
deprived of food and air and warmth
was enough to end a live of the strongest god.
But there it was, the end of life
a force more powerful perhaps
than time itself, source of pain and sorrow
the sea, the black depths of water
waiting to lure, to embrace and finally kill.
So came to be that Cato, god of gods
came to rest when sea him overtook.


After Cato drowns in the sea, the original world is destroyed and eight new worlds are created.

The eight worlds are all ways of perception of the world that all humans inhabit. The worlds are represented by eight gods. These are: Tarynn (the old man), Glanya (life and motherhood), Cyll (the hunter), Ddytha (wisdom), Llyd (the warrior), Alynna (Beauty, Sex and Fertility), Môrlwydd (the sea and passion) and Craitmyn (the earth and reason).

The head of the Calbain Church on Micras is the Grand Master. The Grand Master appoints Masters, who serve as representatives of the Church in different wards of Calbion. Under the Masters stand the Priests, who in their turn preside over the lower clergy.