The Virtual United Provinces (Virtuele Verenigde Provinciën) were founded on January 14, 2007. From the very start, the wikiwiki was an important part of the nation's culture and bureaucracy. It's culture drew heavily from the historic Republic of the Seven United Netherlands.

The nation was renamed three times: 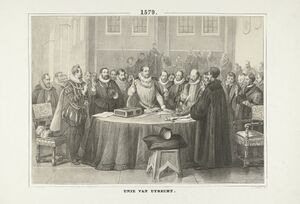 Signing of the Union of Utrecht

The Virtual United Provinces (Virtuele Verenigde Provinciën or VVP) were founded on January 14, 2007 under the leadership of Frans, and were given their constitution on January 20. The "Union of Utrecht 2007" was drafted by the Revolutionary Council (Revolutionaire Raad) and was ratified by both the Free State of Antwerp and the Free State of Ghent.

During the era of the First Republic life in the provinces intially bloomed. At the federal level there were a lot of international contacts. The United Provinces were one of the founding members of the Dutch Treaty Organisation.

However, the federal system soon proved to be unworkable, largely due to the low levels of population of the provinces and territories, forcing the central authorities to assume more and more power. On June 11th, 2008, the provinces ratified a new constitution, thereby establishing a unitary state under the name of the Republic of the Netherlands (Republiek der Nederlanden).

The Union of Utrecht established a federal state, with autonomous provinces with an active system of government. There were three active provinces:

Those provinces which did not have a sufficient population level, were managed by the central authorities as territories (generaliteitslanden).

The federal level featured a presidential system. Executive power was vested in the Stadtholder (Stadhouder). Due to its short existance, it had only one Stadtholder: Frans. It had a bicameral legislature: the States-General. The Lower House (Tweede Kamer) representing the provinces proportionate to their size, and the Upper House (Eerste Kamer) having one representative for each active province. The Judiciary was headed by the Supreme Court under Chief Justice Erwin V.H..

The central bank (named "Centrale Bank der Nederlanden") was founded on April 24, 2007. It used Sander Dieleman's PHPBank and later VeenBank. The Free State of Ghent had the most active economy in that era. De country's currency was orginally named "florijn".

The establishment of the Dutch Treaty Organization made international trade possible within the Dutch sector.