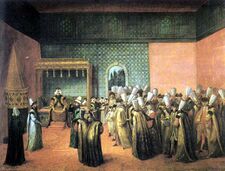 A meeting of the Diwan

Before a law is passed by the Majlis-ash-Shoera, it needs the advice of the Islamic Diwan, although this advice is non-binding.

The Islamic Diwan has three categories of members:

Former heads-of-state who were no longer a citizen of the Republic at the time of the establishment of the Islamic Diwan, but who could opt to sit in the Diwan by right if they were to regain citizenship: