From 1709 AN-1711 AN, the Federation of Nouvelle Alexandrie, Kingdom of Ransenar, Western Natopia, Eastern Natopia, and other Micran nations suffered a spike increase in inflation as disruptions in the supply chain mounted in the lead-up to the Natopian division. Further economic uncertainty and lengthy negotiations throughout the mid-1700s surrounding the division of the Natopian Empire, growing consumer demand outpacing supply and manufacturing capacity in all nations, and disruptions in Ransenar and in Lyrica due to the Great Vanic Revolt all contributed to trade and industrial activity contracting. This caused a fall in GDP in several successive quarters in Nouvelle Alexandrie, Ransenar, Western Natopia, Eastern Natopia, and Constancia. Shortages of key consumer goods and food further drove prices of daily staples upward, placing additional pressures on individuals and governments in the affected economies. The economies impacted by this recession are characterized as deeply interconnected economies through financial, military, political, and cultural common associations such as the Raspur Pact, the Community of Goldfield, and the Euran Economic Union.

The recession of 1709 AN-1711 AN was a relatively mild recession but was longer than anticipated. The recession lasted for 13 months, beginning in late 1709 AN and ending in early 1711 AN. The recession ended one of the longest periods of economic expansion in the history of Nouvelle Alexandrie, which had begun in late 1694 AN. In many countries like Nouvelle Alexandrie, Ransenar, and Eastern Natopia, the contraction in economic activity also coincided with the active work of their governments in closing large budget deficits and many of their central banks raising interest rates to stop runaway inflation.

As additional large infrastructure projects in Nouvelle Alexandrie came online and more clarity was obtained on the settlement of the Natopian division, economic growth resumed in all the affected economies by the start of 1712 AN, with improved unemployment numbers and decisive action in the economies of the affected nations by their governments to address the recession.

Division of the Natopian Empire

In 1709 AN, the Ransenari farmer-labor crisis, 1709 kicked off a widely felt economic shock across many Raspur Pact economies. Critical shortages of labor in Ransenar's agricultural and mining sectors lead to delays in order fulfillment for agricultural and other raw material exports to Nouvelle Alexandrie, Western Natopia, Eastern Natopia, and Constancia. Causing the labor shortages was the increasing rate of retirement of farmers in Ransenar, with the average age of Ransenari farmers being around 53 years old. This further enabled many ancestral and small family farms to be purchased at discount prices by many of the large farming conglomerates in Ransenar, as well as from abroad.

The so-called "Food Shock" that significantly impacted the Constancian economy renewed calls for a food security program within the Imperial State, and while exports from Nouvelle Alexandrie and other nearby trading partners helped stem the tide, realization that the Imperial State was admittedly dependent on Natopian and Ransenar food exports caused a stir in the Imperial Synkletos.

To temper potential political unrest, elections for the 12th Imperial Synkletos were surprisingly called for 1710, after many surmised that the 11th Imperial Synkletos would be the first in history to utilize the maximum constitutional term limit of seven years. An announcement was also surreptitiously made that the Prince Iñigo would relinquish the office of Mesazon on the last day of 1709, ostensibly due to his marriage, to be replaced as Mesazon by Imperial Senator Garvin Hendriksson, due to his strong business background.

The establishment of the Constancian National Credit Union was also initiated, to provide some measure of assistance to the masses. The Constancian Privatization Authority, modeled after the Zeed National Debt Management Authority, was also created to purchase or receive toxic assets and equity from financial and business institutions, and sell the same at auction, to better strengthen the Constancian financial and business sector. Withdrawals from the Permanent Fund were also authorized to stabilize the Imperial Stater or to otherwise purchase certain assets.

Ironically, the financial crisis had a beneficial effect for the Trans-Euran Railway, by expanding the pool of kul labour available to the Grand Commissariat of Eura and Corum as an increasing number of citizens and subjects alike sold themselves into conditions of contractual obligation so as to escape absolute destitution and starvation. Set against this was the excessive resource, labour, and capital demands of the Trans-Euran Railway project effectively unleashing heavy inflationary pressures in the Imperial State itself. The disappearance of so many kuls into an open ended construction project that would see three quarters of which focused in the territories of the Suren Confederacy and Zeed, saw the bargaining position of the remaining freeborn workforce suddenly improve - creating a second inflationary shock as emboldened workers embarked upon a series of wildcat strikes in order to secure wage increases. 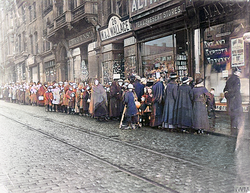 The disruption to allied international trade networks, including the loss of access to credit on favourable terms, and a precipitous fall in demand for exported raw materials such as lumber, steel, and natural gas, had a knock-on effect in the Benacian Union where the domestic economy was already under pressure from the impact of the 1709-1710 North Benacian Famine. Although the High Presidium of the Benacian Union was able to mitigate the worst aspects of the famine by maintaining rations for favoured groups, such as the BUDF and N&H, at the expense of communities designated to be enemies of the Union-State, such as the Amokolians and the Elw, the disruption felt by an economy that relied upon resource extraction and heavy manufacturing, was such that a number of armaments programmes were paused by 1711 AN.

The Benacian regime sought to escape this malaise by responding favourably to the accession of Ransenar to the Benacian Union in late 1711 AN and formalising its membership of the Community of Goldfield, which promised to enhance its access to allied international markets and favourable credit terms within the community.

The disruption in the significant maritime trade routes that pass between Keltia and Benacia further exacerbated the sting the Imperial Federation felt during its years of overextension, as the so-called Grand Armada of the Imperial Federation (or, simply, the Imperial Navy) was forced to use only a small increase of ships to police and control nearly three times the maritime territory it originally patrolled before the war. While the Imperial Federation would normally have been able to safely patrol its portion of the world's ocean during peacetime, the border conflict with Valora required a strong Navy to deal with, and the Vanic insurgency on Tar-Palantir similarly drew manpower from the farthest, and newest, reaches of the Empire.

Slowed construction (and reconstruction) of its new territories forced a reckoning within the centers of command. The High Command and the recently re-constituted Imperial Senate were faced with a dual challenge. Firstly, the government needed to address the domestic impact of a global recession impacting trade. However, large amounts of manpower originally needed solely on Drag'os to tame its vast hinterlands were no longer necessary there, and an unprecedented construction boom ensued following the reunification of the island and the near-simultaneous expansion of the empire into new lands. Secondly, there were increased demands on the Navy before the investment in material and manpower for new lands was to pay itself out, notably in patrolling new areas, actively ensuring Valora was confined to its own coastlines, and building ships to accommodate invigorated domestic trade and travel between the core lands and the outer territories. While manpower could be called up or reassigned with relative ease, even the mighty Imperial Navy lacked the ships required to comfortably patrol waters and finally bring the conflict with both Valora and internal insurgents to a decisive close.

As such, the Imperial Guilder similarly suffered a decline in international value due to increased government expenditure on shipbuilding, bailouts for the Imperial Federation's growing international trading companies, needed spending on massive new territories, subsidies for reconstruction, and on arrangements for enhanced security for its existing and planned overseas bases. The resulting strain on the central treasury forced the country to invest more in domestic mining industries to ramp up production, and reassigned Army personnel to civil engineering projects to make up for shortages in finances and manpower, further diverting from the border conflicts with Valora.

Without fresh Guilders flowing to the rapidly declining Treasuries, these central banks increasingly faced pressures to either borrow fresh credit from Raspur Pact partners or otherwise declare financial insolvency on more than one occasion. Emperor Anarion (likely egged into the move by his Viceroy) felt compelled to personally lend significantly from his own assets to the Imperial Senate in late 1710 AN The resulting recession only ended in the Imperial Federation near the end of 1711 AN due to investments from colonial trade and infrastructure finally kicking in, relieving the beleaguered Imperial Treasuries in both Glacier City and Gondolin. 1712 AN posted reversals in GDP trends, as revenues began to strengthen, trade restored to the global economy, and Imperial Navy ships finally began entering service to ease the empire's vast maritime infrastructure.