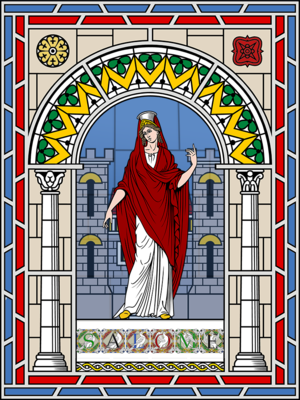 A stained glass window of Kaiseress Salome (1707 AN), located at the Ducal chapel in Gaelen's Hold, in Gaelen's Landing, Duchy of Kildare. While Kaisers don't necessarily play an important religious role, it is not uncommon for them to be elevated into godhood. Depending on the traditions of a certain territory, their role within the daily religious life can differ.

The following is a list of Kaisers of Shireroth in chronologial order, from the legendary beginnings of Shireroth until the present; the calendar used is the AN reckoning. Each reigning Kaiser or ruling Steward is listed with their accession date, date of birth, date of death and blood line. Periods in which the Landsraad ruled the Imperial Republic directly are marked as "Landsraad".

Many of the Kaisers in this list are legendary; Shireroth's modern founding was in 1443 (the beginning of the Third Era). Foreign recognition of the Kaisership occurred later, in approximately 1462, with Kaiser Metzler I ascending the throne. The accurate record keeping in the Imperial Household began with Gaelen II in 1465, and all accession dates after that are taken to be authentic.

Legitimacy has always rested upon descent from Kaiser Raynor I. After seventeen centuries, much of Western and Central Benacia, as well as a fair smattering of Babkhi and Kildari can claim this boon. Nonetheless the frequently rotating succession remained within the clutches of a dozen or so noble houses who jealously guarded their notoriously intermarried bloodlines. In spite of the the vigilance of the Imperial Republic's noble oligarchs there have been several "sanglorian" Kaisers in the modern era, alongside a half dozen inhuman Kaisers (whether revenants or aliens). As the Third Era wore on, things became progressively stranger, until a measure of sanity was restored by the confirmation of the dynastic succession in the hands of the House of Ayreon-Kalirion, itself being however troubled by some of its dynastic associations.

Debate continues as to whether the establishment of a new period of dynastic rule constitutes a fourth era. In the past, using a discredited historiography and calendar, as many as seven eras were postulated. However, following the Auspicious Occasion, a more rational approach to historical research has taken hold and the process of investigating and verifying the reigns of the Kaisers of the early era, and indeed the nature of their rule, is ongoing.

All Kaisers of the First Era, following Kaiser Raynor I, save for Kaisers Timothy I, Matthew I, and Edwin I were related by blood to Kaiser Raynor I.

The second era was dominated by warring states, who somewhat tenuously laid claim upon the bloodlines of the Kaisers of the preceding era, who vied for dominion over the course of the Red Elwynn between Shirekeep and Musica. An increasing reliance upon necromancy and daemons on the part of the houses as they struggled for paramountcy saw the society of the duchies of Brookshire and Goldshire progressively undermined until, after the diabolical pact of Kaiser John, those who remained were unable to maintain the sovereignty of eastern Benacia in the face of foreign colonists.