Yardistan (Yardistani: Iardista [jar'dis.ta]) can refer either to the Duchy of Yardistan, the County of Yardistan, or the Isle of Yardistan. The duchy has existed in one form or another since Shireroth left Tymaria, making it one of the older duchies in Shireroth. It's history stretches farther back than that, into the days of Alexandros. 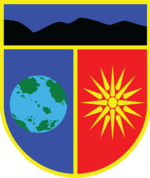 Coat of arms of Yardistan and its count

Since it's creation by Erik Mortis and Stjepan Aracic, it has been a place of general insanity and political instability. It was first noted as an official body on 11 April, 2001, when the Hegemony of Alexandros annexed it. Prior to that, it was simply Erik running around and taking stuff from the former Flying Islands of Jasonia. Stjepan came to visit, and when Erik asked him if he had anything to donate, Stjepan gave up several square inches of his back yard. Accordingly, the territory became known as "Yardistan", and Stjepan was appointed as its governor. As he was co-founder of Istvanistan, his influence caused pieces of it's more unusual culture to be absorbed. Meanwhile, the famous Yardistani Annexation Corps was created by Erik, and under its name began stealing things in the name of the newly created territory.

Soon after, The Color Rebellion started in response to the color layout on the Alexandros message board. It was the first Yardistani Rebellion to take place, but it basically ended when it was discovered that Erik was controlling the militaries on both sides of the conflict. This event sparked the tradition of nonsensical rioting that Yardistan became known for.

Stjepan became less active over time. A newer micronationalist called Nick the Yardistani, who had recently been annexed by the YAC, became active in Alexandros and saw the empty territory in which he resided as an opportunity to find his way in his new hobby. He asked Kaiser Metzler I for permission to control the territory, and it was granted, assuming that Stjepan would still be the owner.

Under Nick's rule, the area quickly became a controlled anarchy. As there was no formal law in Yardistan, he was considered to be the Anarch of Yardistan. Yardistan's culture began to develop in this period, in spite of the fact that it had on average one citizen.

It was also Nick who started the Whit Rebellion in The Republic of Tymaria in response to Joe Whit's mockery of the YAC. The rebellion brought about great turmoil in the nation which had just begun to settle down. The result of the rebellion was Yardistan's completely taking over Shireroth, the only time it has ever successfully done so. It also nearly resulted in Nick and Erik being kicked out of Tymaria. This state did not last long, and Erik soon seized power back from Nick and returned Shireroth to its rightful place.

Nick the Yardistani later changed his name to Gryphon Avocatio.

Shireroth eventually left Tymaria and re-established itself as a an independent micronation. Yardistan began to get interest from other citizens during this time.

In order to give his most active citizen a reward for his activity, Gryphon created the Barony of Amity and Mirioth for Gregory Russell. The Barony was Yardistan's first. It also absorbed the former Duchy of Straylight, making it into a barony as well.

Two Kaisers have hailed from the island duchy, Kaiser Alejian I (Greg Russell) and Kaiser Wylþeow I (Gryphon Avocatio). Kaiser Los III (Scott Alexander) can also be counted, though not originally from Yardistan.

Dukes, Anarchs, and Governors of Yardistan

(In no particular order, a work in progress)

Yardistan, while never as huge as it liked to pretend it was, created a number of websites that by some mystery managed to survive to this day. Many of these were created in its heyday and, though irreparably out of date, still serve some historical interest.