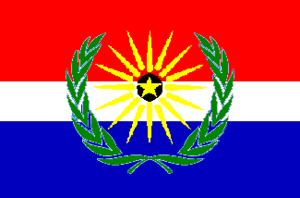 The United Republic of Tymaria was founded on October 31, 2001 as an attempt to merge the largest micronational powers of the time into a monolithic union. It enjoyed about six months of life before its fracture, during much of which it was the leading micronation in the world.

The foundation of Tymaria dates from an attempt to merge Interland and the Free Republic. Other nations of the time, such as the Hegemony of Alexandros and the Rasinate of Q'attera-Macusiaa soon joined in, and, realizing the magnitude of the project, called a constitutional convention directed by Scott Alexander. A number of proposals were discussed including a dual monarchy of Diga Makonnen and the Emperor of Pacifica were considered before settling on a broadly republican form of government developed mostly by Jason Rhode. The other question settled was the name. Tymaria was chosen above such proposals as Micronia and Mergistan.

The leading position in Tymaria was the Prime Executive, who appointed the Ministries and served a general executive type role. The legislature was bicameral, with a House of Peoples working on a direct democracy principle and a House of Nations in which each state was represented by senators. Of these states there were originally seven - Yardistan, Hyperborea, Machiavellia, the Free Republic, Interland, Attera, and Argaal - the states of Akerbjorn and Jaris later brought the number up to nine.

Austi Scot was chosen as the first Prime Executive, and Knight Magistrate as the first Speaker of the House of Nations. The starting government was rather heavy on Atterans, more because they were known for their competence than for any particularly sinister reason. The first threat to the government was the Yardistani Rebellion, in which Yardistan took over Shireroth (thus Yardistan replaced Shireroth as a state), the national government demanded that states hand over their weaponry to the military and Yardistan refused to do so. Eventually the national government retracted its demand and Yardistan fell back into line. There were then a number of random squabbles between states. Edward Conway of Machiavellia tried to impeach Austi Scot over violation of a military technicality, but failed. Hyperborea dissolved itself (blew itself up, actually). The largest and most influential micronation that had refused to merge into Tymaria, Babkha, had a poor relationship with Attera, and because of the Atterans holding high positions in the federal government, Tymaria-Babkha relations became strained as well. These relations reached a breaking point when the country of Morovia collapsed. Both the Atteran faction in Tymaria and the Babkhans wanted to take over the shell of Morovia in order to have it as a colony and leverage its voting rights in the League of Secessionist States. Both sent in agents to try and turn Morovia into a puppet government, and both began highly detailed intelligence work there. Relations between the Atteran element that held power in Tymaria and a more marginalized Alexandrian element had always been very poor, mostly because of very different ways of looking at micronationalism. Alexandrians in the military leaked information about the espionage to the press, and it was printed in the Apollo Fireball a paper at least partially in competition with the Atteran-run Tymarian Sun. After some infighting, it was determined that the espionage operations were illegal and unethical, and Austi Scot was impeached and Diga Makonnen stripped of military command. The nation then had a change of direction in which Alexandrians began to dominate. The second Prime Executive was Jason Rhode, the former Hegemon of Alexandros. Attera, angry at recent events, voted to secede, and eventually the House of Nations voted to let them. After Rhode was elected, he was active and productive for a brief time before disappearing. In his absence, things began to break apart. The Free Republic was claimed by the new nation of Baracao, and the United Republic was sent into a prolonged diplomatic crisis trying to contest the territory. Jason Steffke, who had formerly helped lead the revolution against Austi, inexplicably turned against the country and founded the popular Anti-Tymar Council, whose platform was that Tymaria ought not to exist at all and its component nations should regain their independence. Other former Tymarians, most noticeably Bill Dusch, joined him in this enterprise. Things came to a head when new Tymaria citizen William Jesmer was made Minister of Home Affairs. Jesmer figured (correctly) that using his power to update the website and provide interesting content would be less fun than using it to destroy the country, and so he deleted the Tymarian forums with his friend Philip Locke. During the crisis, called the 4-11 incident after the date it took place, Attera kindly offered their former parent state a place to meet on the Tymarian Defense Forces boards. Eventually, the forum was restored, and Locke and Jesmer unceremoniously kicked out of the nation. They formed their own country, Freenesia, as a base from which to get revenge, and attracted the Anti-Tymar Council, Yuri Andropov, and other undesirable elements to their cause. There was a cold war between the two countries which Scott Alexander and others did their best to try and defuse, and defused it was - Locke, who led the Freenesian effort, had to leave micronations for real-life reasons. In Tymaria, accusations began to fly that Shireroth, formerly the state of Yardistan was becoming too powerful. Shireroth's willingness to conduct independent foreign policy and even declare war on its own did nothing to quell these rumors, although the Shirerithian government did its best to try. Julian Starr, now back in the country, tried to form an anti-Shireroth faction, but the fact was that it was mostly only the Shirerithians who were doing the work in Tymaria now, with Scott Alexander and Tony Au doing most government business illegally without the authorization of the absent Prime Executive. Finally, Rhode's term expired on its own, and Tony Au beat Nicholas du Grifos in the contest to replace him. Au immediately offered all states that wanted to the opportunity to secede, and, excluding Machiavellia, they did. This marks the end of a strong, relevant Tymaria. The country itself sputtered on for about three more months, with Tony Au, Scott Alexander, Orion, and Sirithil nos Feanor as some of the only active citizens. Eventually, in a bid to prevent the Imperium of Menelmacar from taking the place over in Operation Jade Wolf, Au agreed to disband the country in September 2002.

The Minister of Culture for most of Tymaria's existence was Bill Dusch, who tried to implement role-playing-game and fantasy ideas that were poorly received by the vast majority of the states, leading Bill to famously declare that "Tymaria has no culture". While perhaps an exaggeration, there was some truth in this - it was not until April 2002, six months after its foundation, that Tymaria even figured out what its capital city was supposed to be (the creatively named Tymaria City, now owned by Shireroth). However, a good time was had by all in the Tuna Fish Salad Lounge, which at one part was a major contributor to the interdimensional Grand Unified Bar run by Ari Rahikkala.

A proverb says that you can learn from anything, whether it's by taking it as a model or as a horrible warning. Tymaria falls into the "horrible warning" category, and has been used to discourage all sorts of mergers ever since its fall. Even today, three years later, the mention of the word "Tymaria" is enough to send shivers up the spine of anyone trying an ambitious plan. Tymaria changed the balance of power, allowing some nations to be disproportionately large after its collapse. It paved the way for the rise of Menelmacar and served as an incubator for a swollen imperialist Shireroth, which steamrolled out of the Union during Au's administration and has never looked back. Ironically, it is probably also due to Tymaria that Babkha has gained the intermicronational prominence it has; as the lone rival to a global superpower and one of the few countries that chose to maintain independence, it was accorded a high status in the eyes of many and leveraged its prestige into citizens, territory, and patriotic spirit.

On April 1, 2003, it was announced that the Imperium of Menelmacar, the Republic of Shireroth, the Atteran Empire, the Republic of Baracao, and the Oira Arnanorë Menelmacariva were merging into a country to be called New Tymaria. This turned out to just be a very good April Fools'Joke.