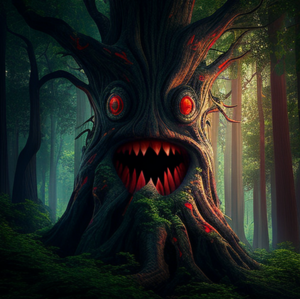 Ladies and gentlemen, the one and only... MALARBOR!

Malarbor is known as the evil tree god within Shireroth and Cedrism. For several decades he played an important role in state propaganda.

In the Cedrist religion, Malarbor is the son of Lumina, Goddess of Light. His father is currently unknown (with Jingdaoese Cedrists claiming that Cato impregnated her when they were both drunk), although this author speculates it may have been H'Graa, God of Wrath. He is the God of Forum Colors, and later became the God of Smackdowns.

A myth, now lost, tells of a battle between Kaiser Raynor I and Malarbor. Malarbor was terrorizing the world by replacing its colors with different, more tasteless and garish shades. Kaiser Raynor I boldly set out and defeated the tree demon in single combat with the Sword of Vengeance, and, as a price for letting the god go, demanded that Malarbor stand guard over the public places of Shireroth, which the god has reluctantly done ever since. Especially popular is the Sanctum of Malarbor in the Yoni Temple Complex in Modan-lach. He has demanded that people pour milk on their fish to honor him as well as increase their nutritional intake.

Jingdaoese and Batavian Cedrists believe that Malarbor had been tempted by evil baishens to roam the lands around Shirekeep and wreck chaos to ultimately weaken the gods' influence over the mortal realm and prepare it for the arrival of the daemons from Balgurd. Raynor's victory brought an abrupt end to this and support the idea that the Kaisers of Shireroth are the earthly protectors of the world.

Malarbor is now one of Shireroth's most easily recognisable symbols. The Pacarians exploited this during a period seemingly leading up to a Shireroth/Pacary war, when graphics designer Sander Dieleman made a big scary propaganda picture of Malarbor with a caption reading something like "Do you want him as your neighbor?" More patriotic uses included his presence on several of Joseph Strong's advertising banners and the use as an image in Cedrist promotional materials.

The association of Malarbor with the Imperial Republic is such that its oracular, gnomic, and sometimes plain malevolent utterances, have achieved a level of credence normally associated with official press releases - albeit with more gore.