From MicrasWiki
(Redirected from The Kaiser)
Jump to navigationJump to search 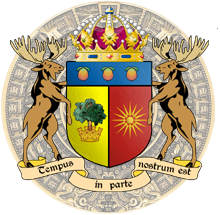 The Imperial Cult of Shireroth is a religious organization that was established during the reign of Kaiser Gaelen IV to encourage the practice of religion within the Imperial Republic and to elevate the position of the Kaiser to that of a demigod or messenger of the gods. According to the teachings of the Imperial Cult, the Kaiser is not a god themselves, but is granted divine powers by the gods to protect the Empire and its people. The Kaiser is also given the use of the Swords of Fire and Ice, which are powerful weapons said to have been crafted by the gods themselves.

Originally, the Kaisers were simply warrior kings and political leaders of the Realm, with no official religious position. However, over time, their presence in folklore, myths, and religion grew. Kaisers often used religious customs and myths to unite the various ethnic groups under one banner, and the tale of Rrakanychan, who was defeated by one of the early Kaisers, is an example of the central role of the Kaisership in Cedrism. With the establishment of the Imperial Cult, Kaiser Gaelen IV attempted to expand the religious role of the Kaiser. However, the cult enjoyed little popularity among the general population and remains largely relegated to the conduct of ceremonial rituals and sacrifices for the Court. Some Kaisers, such as Mog I and Raynor II, have become infamous for their actions and have been elevated to godhood by divine favor. However, not all Kaisers are granted this honor, and the decision lies with the gods themselves.

The cult is an extension of existing religions within Shireroth, and is not a standalone religious institution. In the Cedrist tradition, after the death of a Kaiser, their spirit may continue to be worshiped by the Imperial Cult as a deity or demigod. However, the decision of whether or not to elevate a deceased Kaiser to godhood lies with the gods themselves, and not all Kaisers are granted this honor.It is not required for citizens of the Empire to worship the Kaiser, but it is encouraged to show respect for their religious position and the role they play in protecting the nation.

Any holder of the Golden Mango Throne is also entitled to the historical style of Imperial Niftiness, which has since 1648 largely been replaced by Imperial Magnificence. On 1.I.1704, the style was officially changed to Magnificence.