The term Etzeland is a partial calque of the surname Etzeterra. Originally from Shireroth, the Etzeterras were a prominent local noble family in Woodshire County before moving to Minarboria.

Prior to the opening of Cibola in the 15th century AN, the southern half of the continent was dominated by various proto-Germanic speaking peoples, of which comparatively little is known.

By the 1490s, the various Germanic-speaking peoples had coalesced into a centralised state, Germania, which came to dominate southern Cibola. It was during this period that the first continuously-inhabited cities began to emerge, including Hanover (present day Leichenberg), founded 1490-1500 AN, and Stuttgart (present day Neurossheim), founded c.1503 AN Around 1503 AN, Germania briefly expanded to include the first Principality of Treisenberg, however the union was of short duration and precipitated the final fall of the Germanian state by 1505 AN.

By 1516 AN, the emerging French-speaking Kingdom of Monovia had expanded into eastern Germania, occupying the capital, Berlin, and the city of Stuttgart. Over the course of the following five years, Monovia successfully incorporated most of the former Germanian lands, but the resulting overreach contributed to the collapse of central royal authority c.1527 AN.

A revived Germanian state emerged around 1541 AN. and swiftly dominated the region, before disintegrating into petty states only seven years later.

In 1592 AN., the Rossheimers, an ancient Treisenberger noble family ruling the Corumese Kingdom of Sangun, established themselves in the area, re-founding the city of Hanover as the capital of the eponymous Duchy of Rossheim-Leichenberg. Rossheim-Leichenberg subsequently merged with another Rossheimer principality, Rossheim-Volksburg, to form the Duchy of Rossheim, which itself became a constituent state of a revived United Principalities of Treisenberg. Four years later, the Duchy of Rossheim was proclaimed the Kingdom of Leichenberg, with the United Principalities reconstituted as the abortive Cibolan Confederation.

Upon inheriting the Sangunese throne, in 1600 AN the King of Leichenberg combined his two realms into Sangun-Leichenberg, which eventually evolved into the Empire of Sangun and South Cibola. Weakened by a series of dynastic squabbles among the various members of the ruling Rossheim dynasty, the struggling empire was incorporated within the Empire of Minarboria in 1635 AN.

Following the disintegration of Minarboria between 1640 and 1644 AN, the power vacuum in southern Cibola was swiftly filled by a third Treisenberg State. Wracked by civil war in the aftermath of the 1660 White Plague, Treisenberg was succeeded in 1667 AN by the newly-established Grand Duchy of Helderbourgh, which ruled the region until 1685 AN, initially as independent state, but from 1672-3 as an autonomous region of Batavia. 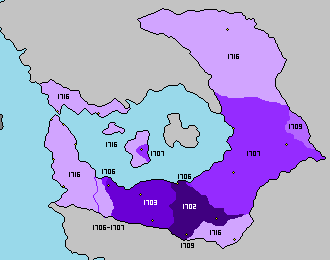 Territorial growth of Etzeland 1702-7 AN

In early 1702 AN, a descendent of the Rossheimers, Mondo Etzeterra, announced a claim to six former Leichenberger bailiwicks. Following a brief conflict between pro- and anti-Mondoist forces, the former eventually prevailed, subsequently proclaiming the establishment of the Mondostate of Etzeland on 10.III.1702.

On 21.IX.1702, the country was officially renamed the Duchy of Etzeland (Cibolan Saxon: Herzogtum Etzeland). Less than four months later, on 12.XIII.1702 AN the Drosselmeyer administration declared Etzeland a grand duchy, apparently in response to the adoption of the superior style by Steerswick.

After lengthy negotiations, the cities of Helderburg, Kronstadt and Vaduz acceded to Etzeland on the first day of 1703 AN, with the latter two changing their names to Mondostadt and Monduz respectively. In 1706 AN, Canton Leichenhafen annexed an area of 2,232 square kilometres in the north east, while Canton Monduz was expanded by 5,256 square kilometres. A further 67,140 square kilometres of former Tieyan territory was occupied as the Eisenfels Natitional Park (Cibolan Saxon: Naturpark Eisenfels); this area was ceded to South Akhidia the following year in exchange for 19,224 square kilometres of territory surrounding the ancient city of Alttreisen, which was incorporated as a seventh canton, Treisenberg.

Etzeland is situated in southern Cibola, to the south of the Central Sea (Batavian: Zeetuinen, Germanian: Meergarten). Its territory consists of a series of river basins extending northwards from the central Helderberg and Leichenberg ranges, whose peaks mark the southern border of the country.

The land along the coast is relatively flat and low lying, particularly in the west, but the terrain becomes increasingly mountainous inland. The highest elevation in the country is the summit of Leichenspitze (Lich Peak), to the west of the city of Leichenberg.

Etzeland has several major rivers. The longest is the Oesch, which occupies the easternmost valley system; the river itself divides into the Vorderoesch and Hinteroesch at the city of Mondoesch.

The northern half of the country has a warm-summer Mediterranean climate (Csb), whereas the south has a predominantly hemiboreal continental climate (Dfb).

Etzeland has a total population of 6,630,977. Population growth is low but consistent, due to a combination of immigration from other Mondosphere countries and a fertility rate slightly above replacement level. The population is highly urbanised and enjoys a high quality of life, with a life expectancy at birth of over 80.

Etzish nationals account for 95% of the population, of which 86% are of Cibolan Saxon ethnicity. The remaining 14% include citizens of Sangunese, Steerish, Tieyan, Benacian and Batavian descent. Resident foreign nationals constitute 5% of the population. Of these, 80% are from other Mondosphere countries, although recent years have seen an influx from neighbouring Akhidia

Citizenship is granted and recorded at the cantonal level and all Etzish nationals are citizens of a particular canton of origin (Cibolan Saxon: Heimatkanton), which is not necessary the same as their canton of birth or current residence. Naturalised foreigners are also assigned a canton of origin.

Cibolan Saxon is the official national language of Etzeland and is spoken as a first language by 87% of the population. Istvanistani, Steerish Low Saxon and Batavian are also widely understood, and small communities of Sangunese and Tieyan speakers may be found in the larger cities.

According to recent figures, 59.4% of the population have a declared religion, of which nearly 95% are Nazarenes. Nazarene Catholics make up 51.7% of the population and since 1702 AN, the community has been in full communion with the Church of Nidaros. Nazarene Protestants account for a further 4.5% of the population, while Tieyan traditional beliefs are practiced by 2.5%. The remaining 0.7% are adherents of other recognised religions.

In the five years since its foundation, Etzeland has evolved from a de-facto one-party dictatorship into a federal semi-constitutional monarchy. Adopted in X.1707 AN, the Seven Plus Three System (Cibolan Saxon: Sieben-plus-Drei-System) formally established Etzeland as federal state comprised of seven self-governing cantons, together with the three shires of Mondo's personal Duchy of Rossheim.

Sovereignty and supreme executive authority is vested in the reigning monarch, Mondo Etzeterra, who has the title of Grand Duke of Etzeland. Although the monarchy is notionally hereditary, in view of the grand duke’s nature as a lich, the succession to the grand ducal throne is considered a largely theoretical matter. However, there is provision for the heir to the throne, Hereditary Grand Duchess Lystasia, to act as temporary monarch should her father be incapacitated.

The grand duke and State Leader are advised by the Federal Advisory Council (Cibolan Saxon: Bundesbeirat), which consists of the grand duke, the State Leader, two elected representatives from each of the seven cantons, and two appointed representatives from each of the three shires of the Duchy Rossheim. The council assists in the formulation of state policy and appoints federal ministers, subject to the grand duke’s approval. 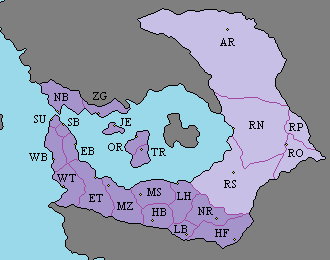 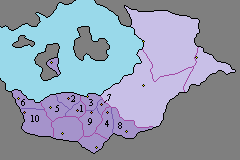 The seven cantons (Cibolan Saxon: Kanton; plural Kantone) are federated states with a high degree of autonomy. Each canton has its own government, police and courts and has the power to set local, but not federal, taxation. The cantons also contribute a portion of their own revenue towards the costs of the federal government.

The Duchy of Rossheim (Cibolan Saxon: Herzogtum Rossheim), also known as Altrossheim (Old Rossheim), is the personal demesne of Mondo, who owns the overwhelming majority of the land as private property. Legally, the duchy has no native population besides Mondo. Etzish citizens enjoy limited rights to residency and property ownership (usually in the form of long-term leases rather than freehold) in designated areas, but remain citizens of their canton of origin; those Etzers born in the duchy are similarly considered citizens of their parents’ canton. All revenue from the duchy beyond that required for the local administration goes to support Mondo and his work, although he voluntarily remits a certain proportion to Etzeland’s federal government.

Etzeland is a leading member of the Mondosphere. An informal alignment of independent states owing allegiance to Mondo, the Mondosphere has never been established by treaty and operates largely at the whim of its enigmatic head. While there are no legal restrictions preventing a member state from concluding its own diplomatic agreements, in practice Etzeland's foreign policy continues to be heavily influenced by the decisions of Fort Ermingander.

Structure of the Heimwehr Etzeland, XV.1702 AN

Etzeland's armed forces are known as the Heimwehr Etzeland (Etzeland Home Guard). The Heimwehr Etzeland was established in early 1702 with the amalgamation of the various local militias, and was originally of brigade strength, consisting of five battalions:

The Heimwehr expanded considerably over the following eighteen months, and as of I.1704 AN has a strength in excess of 30,000 personnel. Its active strength consists of six territorial brigades, divided equally between two division-level regional commands responsible for the eastern and western halves of the country. An additional mechanised brigade formed around the Sturmbataillon Etzeichen is retained as a reaction force under the direct control of the high command.

A historic household cavalry regiment of the Leichenbergish Army, the Rossheim Dragoon Guards, was reformed on 11.XIII.1702 AN. The regiment is not part of the Heimwehr Etzeland and remains under the personal command of Mondo.

Etzeland has a strong industrialised economy, having inherited the bulk of Helderbourgh's mining and manufacturing sector. The state is a major producer of gold and other metals, with several large mines in the south of the country. The valleys and coastal regions in the north support intensive agriculture, sufficient to support the local population. Manufacturing is concentrated principally in and around the cities of Neurossheim, Leichenhafen and Mondostadt.