Treisenberg, officially the United Principalities of Treisenberg (German: Die Vereinigte Fürstentümer von Treisenberg) was a nation occupying a portion of the southern half of the island of Cibola. It is a loose confederation of principalities ruled over by a Grand Prince but with nearly all legislative functions vested in the Council of Princes. The principalities are unique in that each possesses its own distinct culture, albeit many are tied by shared Germanic origins.

Treisenberg is so named due to the geography of the mountainous terrain of Cibola. Treisen is a transliteration of treiben, the Germanian word for drive (as in livestock). The word berg is a common word for mountain. Thus Treisenberg literally means the driving mountains. The full meaning of this name is due to the association that early settlers had with shepherding, especially in the southern areas of the island where, due to the colder climate, growing crops was more difficult. Farmers would often drive their livestock, usually cattle, sheep, or goats, up the mountains in the spring when the snows began to melt. There the animals could feed on the plentiful grass growing on the mountainside until fall came and farmer's brought their livestock back down to the warmer valleys. By this designation, the name Treisenberg was not simply attributed to one area, but was a general term the Germanic peoples used for the mountains. Over time the name became associated with central and then southern Cibola, eventually lending itself to the country's name.

There has been recent argument by researchers that the word treisen is derived from reisen, a generic term applied to a series of crusades against the numerous tribes inhabiting early Cibola. Thus the name Treisenberg would be equivalent to crusader's mountain or mountain of conquest. Historians support this theory based on the early history of Treisenberg during which the young principalities, most notably Rossheim, led a series of conquests against opposing tribes. There is, however, no historical record of either origin, and currently the etymology is still debated by scholars.

Prior to the discovery of Cibola, the island remained entirely isolated. The southern half of Cibola was inhabited by Proto-Germanic and Proto-Slavonic tribes that lacked any cohesion until the arrival of western powers centuries later.

The First Age of Treisenberg

The founding of Treisenberg is attributed to the date of 1965 ASC (Dec 22, 2004) by Franz-Josef I. Besides Germania and San Martin, it is considered the third nation to establish itself on Cibola.

In 2290 ASC (Nov 12, 2005), Treisenberg passed into the hands of Stormark, albeit at a greatly reduced size with most of its mainland holdings left to fend for themselves. In Treisenberg's chronicles, this is referred to as the Siebenbergen Dark Ages.

The Second Age of Treisenberg

In 4775 ASC (Sept 2012) the Rossheimers and Rhaetians met and agreed upon a basic outline for the reformation of the United Principalities; the addition of Kujirashi-Wahlstadt was made a few weeks later and rounded out the confederation.

Treisenberg generally maintains a policy of neutrality when it comes to setting a foreign agenda. Although it is concerned with matters pertaining to Cibola, there is a strong tendency to focus on internal development rather than external. Nonetheless, Treisenberg has been active diplomatically, and it cannot be said that they do not partake in helping to settle international disputes. The country was active recently (October 2012) in helping to quell the diplomatic dispute that had arisen over the Barbary Peninsula between Batavia and Jingdao.

During the First Age of Treisenberg, the Royal Treisenberger Air Force was the pride of the military and the most developed component of the armed forces. This was largely due to the efforts of Prince Gustav von Schaan who led a modernization effort of the air force and personally helped finance the purchase of new equipment. At one time, the RTAF was the mightiest air power on Cibola.

Treisenberg occupies a southerly portion of the continent of Cibola, which in the local Germanian dialect is called Siebenbergen (seven mountains). 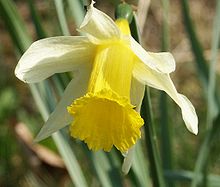 The Cibolan Daffodil (Narcissus cibolus) is a native wild daffodil common to the southern half of Cibola (Germanian: Siebenbergen). It is a perennial plant that grows from a bulb and flowers annually. The plants grow best in grasslands and rocky ground, but will also grow under the cover of a light forest canopy. Cultivation of the Cibolan Narcissus has been a pastime of Treisenbergers for centuries, and an international market for the sale of bulbs has grown over the past two-hundred years. A large number of hybrids now exist thanks to the breeding of specialty cultivars.

Treisengart (lit. driving gardens) was originally a largely open area of grasslands and pasture that was settled by farmers during the heyday of Treisenberg's first age. As an agricultural area, the locals began calling it Treisengarten, from the word treisen, for which the definition of driving was applied to driving livestock, as with the etymology of Treisenberg, and to the many planted fields or gardens that accompanied the farms. As neighboring Leichenberg grew and a new capital was founded at Neutreisen, the economy of Treisengart shifted from rural agriculture to posh metropolitan. Although much of the outlying areas of Treisengart remain farmland, the coastal area and especially the urban area around Neutriesen have developed into grand estates and manors belonging to wealthy politicians, noble families, and wealthy business owners. Today the reference to gardens is more apt as the area has become renowned for its rich botanical gardens patronized by wealthy landowners. The cultivation of the Cibolan Daffodil has become a major export commodity, and has resulted in a burgeoning hybrid plant industry - Treisengart bulbs are considered some of the finest on Micras and are sold worldwide. Besides a horticultural industry, Treisengart has developed a strong tourism business along Cibola's inner sea, wherein a resort riviera has emerged. As prime agricultural land, the many farms remain a backbone to feeding the rest of Treisenberg, supplying corn, wheat and other essential crops to less fertile areas of the United Principalities.

The Duchy of Rossheim-Slavonia (German: Herzogtum Rossheim-Slawonien) is the successor to the Principality of Rossheim, one of the original founding states of the United Principalities. The Duchy is named for its powerful ruling dynasty, the House of Rossheim, which also rules over the Empire of Greater Sangun, as well as the Duchy of Lichbrook and Marquessate of Modania in Shireroth.

Officially called Rhaetia Minor, Rhaetia is a remnant of the original Principality of Rhaetia Magna, another of the original founding states of the United Principalities. During the Siebenbergen Dark Ages most of Rhaetia Magna's territory succumbed to anarchy and was annexed by neighboring Alexandria, although the royalty was able to obtain safety in a secluded valley to the south. Having settle this new valley from a literal backwoods, the royal family re-established the Rhaetian state at its new capital of Vulcuria. With the emergence of a new Treisenberg, Rhaetia came out of isolation to rejoin the United Principalities. Although only a fragment of its former glory the state is rebounding well has gained a considerable influx of population thanks both to growing families and immigrants.