The name Steerswick is derived from Swak Steer, the original name for the capital and largest city. Historically, the area was also known as Steeria or Stiermark.

Steerswick's territory consists of several drainage basins in the south western corner of Cibola, extending from the Helderberg Mountains to Southcape, the southernmost point of the continent. The terrain is mountainous in the extreme north, with interspersed hills and river valleys extending south to a flat coastal plain. With the exception of the mountain peaks in the extreme north, the country has a predominantly warm-summer humid continental climate (Dfb). Elevated areas are dominated by deciduous and coniferous forests, with extensive grasslands in the river and coastal lowlands.

The Isle of Wadon and Stonewall Peninsula of Sypyr are also part of the country.

The region was home to several early states, about which comparatively little is known. The city of Swak Steer was founded c.1539 AN by tribes from the south, although the state they established had collapsed by 1550 AN.

On 9.I.1598 AN, Steeria was erected into a duchy for the King of Leichenberg’s children, Igor Viktor and Viktoria Adelheid. Although the duchy was reincorporated into Leichenberg only ten months later, it continued to be administered separately from the remainder of the kingdom, reinforcing a nascent local identity that was confirmed when Igor Viktor and Viktoria Adelheid’s son, Max II, was proclaimed ruler of an independent Kingdom of Steeria (Cibolan Saxon: Königreich Stiermark (in XV.1617 AN.

In I.1628 AN, Steeria joined together with Highfield as the United Kingdom of Steeria and Highfield (Cibolan Saxon: Vereinigtes Königreich Stiermark und Hochfeld.

After the collapse of Rossheim rule, Steeria was incorporated within the Grand Duchy of Helderbourgh in 1667 AN. The Grand Duchy, by then part of the Kingdom of Batavia, disintegrated in 1685 AN. 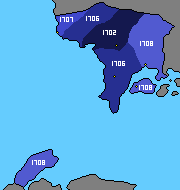 Territorial evolution of Steerswick, 1702-8 AN

The emergence of Mondo Etzeterra into the politics of southern Cibola in 1702 AN, inspired a resurgence of Steerish nationalism. The years of independence between 1617 and 1667 AN had caused a distinct Steerish identity to emerge, increasingly seen as separate from the Cibolan Saxons to the north. Helderbourgish rule had only served to strengthen this trend, and although nostalgia for the defunct Rossheim dynasty remained strong, local support for Mondo was tempered by the determination of many locals to avoid domination by a revived central authority north of the mountains.

After lengthy negotiations, representatives of the local estates offered Mondo the regency of a revived Steerish state, the Grand Duchy of Steerswick, on the understanding that the throne would pass to one of his future offspring when they came of age. It was also stipulated that the Grand Duchy would not be united with Etzeland or another Cibolan Saxon state.

On 20.XII.1702 AN, Mondo formally accepted the offer and announced that a suitable candidate for the grand ducal throne was “being assembled”. Mondo's first child, a daughter Lystasia, was born on 19.II.1703 and recognised as grand duchess of Steerswick three days later.

On 6.VIII.1706 AN, Grand Duchess Lystasia terminated the regency of her father and shortly afterwards announced an ambitious plan to reclaim various territories that had once belonged to the former Kingdom of Steeria. Dubbed the "Lystasian Reconquest", the final months of 1706 AN saw Steerswick annex the entire Southcape peninsula- an area of 244,872 square kilometres- together with a further 139,788 square kilometres adjoining the Grand Duchy's western border. The former was incorporated as the province of Southcape/Penn an Soth, while the latter became the West Steeria National Park.

The following year, in the aftermath of the 1706 Akhidian Crisis, Steerswick annexed a further 55,296 square kilometres of territory, including the city of Regina. Together with the West Steeria National Park, these new lands were formed into a third province, West Steeria.

Steerswick is a monarchy. Sovereignty and executive authority are both vested in the reigning Grand Duchess, who is advised by the Estates. A vestige of the threefold social system under the former Kingdom of Steeria, the contemporary Estates are an informal assembly of appointed and elected representatives from the principle settlements.

In view of the extreme youth of the Grand Duchess Lystasia, authority was initially exercised by her father, Mondo Etzeterra, who in practice allowed the Estates to manage the day-to day affairs of the Grand Duchy. It was originally foreseen that these arrangements would continue until the Grand Duchess attained majority in 1720 AN; however, on 6.VIII.1706, the regency was unilaterally terminated by Lystasia- still a mere four years and seven months old- with the support of the Estates. 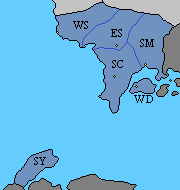 The Steerish economy is dominated by the primary sector, in particular mining and forestry. The mountainous north of the country contains several major gold mines, although they are less productive than those across the border in neighbouring Etzeland. Agricultural activity is concentrated predominantly in the western coastal plains between Regina and Gebra.

The ports of Steermouth and Regina serve as major transportation hubs for the import and export of goods to and from both Etzeland and Steerswick.

Steerswick has a population of 2,084,461. The majority of the inhabitants are of Germanic descent, but unlike the neighbouring Cibolan Saxons, commonly speak a "low Saxon" dialect similar to Istvanistani, although the Cibolan Saxon language remains widely understood. In the region of Southcape/Penn an Soth, a minority continues to speak Old Steerish, a Proto-Calbi language related to Calbic. In 1706 AN, Old Steerish was recognised as a national language alongside Steerish Low Saxon and Cibolan Saxon.

The overwhelming majority of the population are followers of the Church of Nidaros.

Most of the population reside in urban areas. Besides the eponymous capital, Steerswick, principle cities include Steermouth and Regina on the coast, Steerhead, in the north of the country, Gebra, in the southern region of Southcape/Penn an Soth, and Wadonston, on the Isle of Wadon.