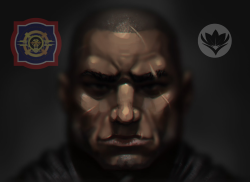 Tokaray al-Osman, self-proclaimed Khan of Vijayanagara, was born in the year 1582 at Raspur in the Kingdom of Babkha. He was the son of Aurangzeb (the former Kaiser of Shireroth) and Samira, a concubine of the household of the Emir of Raspur. A minor scandal which necessitated their departure to Elwynn. He was the uncle (through his sister Fatima) of Kaiseress Noor and step-uncle of both his wives Isabella and Miranda. Reputedly now, as of the year 1650, he has become a cursed soul pursuing a grisly vengeance from the depths of Balgurd, his human form largely extinguished, leaving a tortured and disfigured wraith sustained through his unending torments by the depth of his malice and hatred alone.

One of the last surviving members of the House of Osman alongside his brother Aurangzeb the Younger, who succeeded to the title of Khan of Vijayanagara, his sister Fatima and step-sister Alissa.

After the failed coup of Royston Merrick he installed himself in the city of Timothea, Goldshire, in late 1604 using forged certificates and references to portray himself as a practising Psychiatrist of the Ardashirshahr Psychiatric Hospital. He was also obliged to lie about his age, pushing his date of birth back to 1572. Fortunately for him, medical authorities in Goldshire were not noted during this period for the rigour of their background checks.

Tokaray swiftly discovered that the key to maintaining the facade was an authoritative tone and a no-nonsense attitude towards applying the fabled chemical cosh to those patients who came into his clinic via government referrals and, conversely, upon lavishing tea, sympathy, and sundry talking therapies to the bored neurotic upper-class ingenues who were convinced of the fascinating significance of their inner turmoil. It was this latter category who, crucially, had indulgent and concerned fathers and husbands willing to lavish inordinate sums upon effecting a "cure" for the ever-expanding list of maladies Tokaray felt increasingly confident in inventing to flatter the vanity of his more well-connected patients.

Steward of the Coordinated State

Using the experienced smugglers of the Simrâni Clan as intermediaries Daniel Simrani-Kalirion arranged for money and arms to be smuggled south to Dr Tokaray al-Osman, who was able to exploit old family contacts and the chaos of the War in Shirekeep to begin hiring Dromosker Mercenaries and purchasing grain barges for conversion into rocket launching platforms.

On 1 Amnure, Elroqpinu 1605 the coup plotters struck. Sailing upriver from Timothea the riverine flotilla of barges assembled by Dr al-Osman launched a surprise rocket barrage against the Elwynnese bailiwick of Mariyechelân which set the city aflame and under the cover a rolling fog-bank dispatched Dromosker war canoes to the western bank of the East Elwynn River to swarm into the town and to butcher and cannibalise the defenders. However there was no resistance and the disappointed Dromosker resorted to indiscriminate rape and plunder instead.

Nathaniel Ayreon-Kalirion proved to be a source of continual exasperation for Conducator Daniel Simrani-Kalirion, and accordingly for Tokaray al-Osman as well who was required to carry on the day to day business of government in both their names.

Steward Tokaray al-Osman was overthrown and exiled. The successful putsch was organised by the Panopticon Department and the Cabal of Government, led by three UDF generals; Laqi Hyrrion, Danyial Dravot & Brigadgeneral Fredrik Anders. It was widely suspected at the time that the coup was at least tacitly supported by Simrâni-Kâlirion and Councillor Deimos Jasonides, alarmed at the power being wielded in Elwynn by the Babkhi.

Dr Tokaray al-Osman was during this time imprisoned in the Dragonsfold Contentment & Wellbeing Clinic attached to Dragonsfold Gaol. In keeping with the traditions of the Coordinated State, it was believed that his supervisors, or rather his captors, were seeking via guided counselling to discuss with the Doctor the various misdeeds of his life and the consequent pressures of guilt that he might - they would suggest - be feeling. When individuals in counselling or subject to preventative detention begin to suffer from acute emotional distress that amounts to suffering contrary to their human dignity it has often been the case that the State was willing to - reluctantly - offer euthanasia for the patient. It is not known for sure whether that offer was ever extended during those sessions.

Even if they had not it would have been highly likely that Tokaray was expecting to have that conversation and it was perhaps therefore to pre-empt it in 1614 that he was inspired to take action. Inspired to the point where he paused only to dig out the heart of his psychiatrist with a spoon before carving a bloody path to freedom leaving a dozen dead and a riot in his wake.

The Counter-revolution against Aasmund Vigeland was led by the insane Tokaray al-Osman, who declined to revive the Coordinated State of Elwynn and thus left the way clear for a Ayreon-Kalirion restoration under Prince Jonathan Ayreon-Kalirion and his Steward Hallbjörn Haraldsson.

Fugitive in "The Green"

Little is known of his subsequent movements save that they point through a trail of accounts of arson, assault and larceny towards an escape into the badlands of Western Benacia. There, rumour has it, he was subsequently been spotted in the company of a minor bandit known as Sighvat the Yardistani, an individual who primarily subsists by raiding small Tellian communities in the Vale of Angularis.

That he is unlikely to be content to subsist on such paltry spoils is indicated by his recent marriage alliance with the Patroness of Kalir from whom he received Miranda Simrani-Kalirion in return for various pieces of military hardware and laboratory equipment.

After his daughter, Azardokht al-Osman, fell into the clutches of Thorgils Tarjeisson along with the Simrani sisters as a result of a cudgeller raid carried out in 1636, Tokaray was obliged to assist the Elwynnese authorities in unpicking the Dark Orchid Society's network of conspirators in Alalehzamin and the Vale of Angularis and was obliged to accompany the Arandur on his assize of the restive bailiwick and thus play a part in the counter-insurgency operations that saw his former collaborators destroyed as a military and political force.

The ESB-Jörmungandr Group considered this captive band of nobles to be of further utility when it came to advancing its cause in the Kingdom of Goldshire. To reinforce the union of the Simranis and the Osmans, Tokaray was induced to marry Isabella, with the Arandur officiating, in a ceremony at Azeroth in the first month of 1640. On that same occasion, Tokaray's daughter, Azardokht al-Osman was pledged in marriage to Isabella Simrani-Kalirion's son Daniyal Simrani-Kalirion, himself a clone of his own grandfather, when they came of age. It was considered by some that the degree of incest that this new alliance entailed, on several levels, was becoming positively nauseating.

Thus, reinforced with ESB credit and weapons, Tokaray, with his two wives and their hapless band of retainers, were returned to the isle of Amity where Isabella enjoyed the title of Countess as a consequence of her sister, Queen Noor, placing more faith in the ties of blood than perhaps one should.

The Chamber of the Crypteia

Oustfest and the Year of the Four Kaisers

File:T4.png
It has been alleged, in certain occult circles, that Tokaray is not necessarily enjoying the afterlife, at least not in the sense that most people would understand "enjoyment".