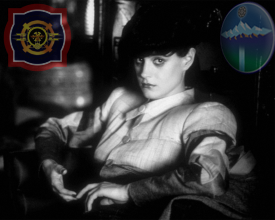 The Lady Miranda bint Dâniyal Umra Suleiman Simrâni-Kâlirion ibn al-Majeed bin Sathrati, (born 1604 in Ribat al-Eluinshahr, died 1653 in Arg-e Ardashir, Jadid Khaz Modan) is a member of the Imperial Bloodline of Ayreon-Kalirion, the House of the same name, and the House of Osman by marriage.

She was 3/4 Elw but never strongly identified with the Elw culture, becoming - in her own way - more of a rootless cosmopolitan.

After the fall of the Coordinated State in 1612, the Simrani sisters were placed under the care of separate warders loyal to the old regime who took them into quiet exile in Goldshire. Miranda, at the age of eight, was left in the care of Frederik Anders, the UDF Brigadgeneral from the Western Marches.

A pawn in the schemes of others 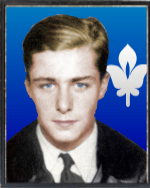 Tokaray al-Osman; usurper and Patron of the House of Osman, now believed to be missing.

From being a foster father Frederik Anders has moved in to stake his claim upon his ward and in 1628 became her husband. Seemingly the match was consensual, although it might be suggested that Frederik had enjoyed a long period in of responsibility for her well being in which to influence her feelings. Irrespective of the circumstances the pair eloped to Fiorecittá, the remote Tellian enclave beyond the Trans-Elwynn region in Central Benacia. The marriage was seemingly a happy one with one boy being born in 1629 and two more, twins, following in 1630.

The perceived slight, however, of Miranda being seen to marry beneath herself to a commoner, inspired her sister, Isabella, to a cold fury. This, combined with a desire to escape from a marriage match with the House of Ettlingar Freyu, inspired her to take a dozen of the family's retainers, a portion of the Simrani treasure-horde and a liberated main battle tank and to set off to Fiorecittá in pursuit of vengeance. The departure took place on Izillare 14 Vixaslaa, 1632, the date of a left behind for the attention of her step-sister Noor expressing, amongst other things, disapproval of conjugal relations with the Elfinshi.

Brushing past a weakly manned Tellian border post, Isabella swept into Fiorecittá and took the family of the city Burgomaster hostage demanding in return for their release the handing over of Frederik Anders and his family. After a tense stand-off, the Tellian state capitulated agreed to the hostage exchange which took place at an abandoned Ashkenatzim shtetl in the Green. After leaving her sister and nephews in the care of her faithful retainers, Isabella - with a kitchen knife in one hand - dragged Anders into a ruined barn. He was never seen alive again. The so-called Bloody Barn has become a scene of pilgrimage amongst the more morbidly inclined partisans of the House of Kalirion.

The severed head of Frederik Anders was sent to Noor as a gift and a symbol of reconciliation and the restoration of family honour on Izillare 20 Qinamu, 1632.

Isabella then took it upon herself to raise Miranda's children in the hope that they would become faithful servants of the family.

In 1634 the Patroness of Kalir reached an accommodation with erstwhile Steward of Elwynn and paramilitary warlord Tokaray al-Osman whereby she acquired provisions, a cache of weapons, laboratory equipment, forty Land Cruisers and pick-up trucks, and an entourage of one-hundred and fifty paramilitaries from the Dark Orchid Society. The security detail was intended to provide protection against brigands such as Sighvat the Yardistani who are active in the Vale of Angularis.

The price for this munificence was her younger sister, Miranda, who was given in marriage to Tokaray, cementing an alliance between the House of Osman and the Simrani.

In subsequent years Miranda, who had endured her share of suffering, sunk down into the consolations of debauchery, finding solace in wine, morphine, and sexual partners of every gender. Transplanted from the wilds of inner Benacia to the newly created Emirate of Jadid Khaz Modan she lost her self in the pursuit of luxury and new distractions. Her manifest unsuitability to serve as regent (1644–1647) during Isabella's many absences from the isles in the pursuit of office and power in Natopia opened the door to faction and rivalry within the House of Osman, a process that culminated in the so-called Women's War.

At length Miranda was to perish miserably, found dead in her chambers, her supply of heroin having been adulterated with grains of ricin. It was never conclusively proven but blame for the poisoning came to focus on Alissa al-Osman, whose ambition to rule in the isles had been stoked by Miranda's failure to take up the mantle of leadership and govern effectively. Isabella certainly thought so and would go on to exact a dreadful revenge upon Alissa for her sister's death.

Miranda has three sons from her first marriage

They are, in order of birth:

From the second marriage: