The House of Ayreon-Kalirion was gravely affected by the scandal of Miranda Simrani-Kalirion being seen to marry beneath herself to Frederik Anders, the UDF Brigadgeneral from the Western Marches, inspired her sister, Isabella Simrani-Kalirion, to a cold fury. This, combined with a desire to escape from a marriage match with the House of Ettlingar Freyu, inspired her to take a dozen of the family's retainers, a portion of the Simrani treasure-horde and a liberated main battle tank and to set off to Fiorecittà in pursuit of vengeance. The departure took place on Izillare 14 Vixaslaa, 1632, the date of a left behind for the attention of her step-sister Noor expressing, amongst other things, disapproval of conjugal relations with the Elfinshi.

In 1634 the Patroness of Kalir (Isabella Simrani-Kalirion) reached an accommodation with erstwhile Steward of Elwynn and paramilitary warlord Tokaray al-Osman whereby she acquired provisions, a cache of weapons, laboratory equipment, forty Land Cruisers and pick-up trucks, as well as an entourage of one-hundred and fifty paramilitaries from the Dark Orchid Society. The security detail was intended to provide protection against brigands such as Sighvat the Yardistani who had attacked settlements in Lichbrook and was believed to be moving closer to the border with the Vale of Angularis.

On Izillare the 20th of Nomeziooqu, 1635, Miranda also gave birth to her first child by Tokaray, Azardokht, whose name means 'Daughter of Fire' in Babkhi. A desire to secure these tenuous threads of genetic continuity, as well as mounting alarm at the power Sighvat was beginning to acquire in the Vale, led the Simrani sisters to begin to look for the means of effecting a reconciliation with their other sister, Noor, who was by this time Queen of Goldshire in her own right. At the same time, Tokaray al-Osman sought to distance himself from the Dark Orchid Society, at least for the moment, sensing, perhaps correctly, that they were moving too fast towards a direct confrontation with the Kingdom of Elwynn, which could ultimately call upon superior firepower, air support, artillery and the massed ranks of the Longship Guards, the Union Defence Force and the Gentlemen-at-Cudgels. As such his priority was to secure the removal of his newly acquired family and retainers out of the Vale.

The ESB-Jörmungandr Group considered this captive band of nobles to be of further utility when it came to advancing its cause in the Kingdom of Goldshire. To reinforce the union of the Simranis and the Osmans, Tokaray was induced to marry Isabella, with the Arandur officiating, in a ceremony at Azeroth in the first month of 1640. On that same occasion, Tokaray's daughter, Azardokht al-Osman was pledged in marriage to Isabella Simrani-Kalirion's son Daniyal Simrani-Kalirion, himself a clone of his own grandfather, when they came of age. It was considered by some that the degree of incest that this new alliance entailed, on several levels, was becoming positively nauseating.

Thus, reinforced with ESB credit and weapons, Tokaray, with his two wives and their hapless band of retainers, were returned to the isle of Amity where Isabella enjoyed the title of Countess as a consequence of her sister, Queen Noor, placing more faith in the ties of blood than perhaps one should.

Isabella Simrani-Kalirion considers the House of Osman along with the isles, to be mere stepping stones to here ultimate ambition, the restoration of Simrani-Kalirion rule in Elwynn. To that end she had arranged the double marriage alliance with Tokaray so that her son, whom she had cloned from her murdered father, would marry Tokaray's daughter by Miranda, Azardokht al-Osman. The fly in the ointment of this plan however was that Azardokht was abandoned in Elwynn during the Year of the Four Kaisers and subsequently became the ward, effectively the prisoner, of the Arandur of Alalehzamin and Utasia, the Steward himself (Daniyal Dravot), who subsequently transferred her, along with Lord Adam's infant son, to Shirekeep and confinement in the Steward's Tower under the care of a governess not overly given to sentimentality.

The infant (Vidar)... in the Steward's Tower... only other companion, aside from her Governess (Yara Rose of Erudition), was the young Azardokht al-Osman, a hostage of the Steward kept in order to ensure the good behaviour of the House of Osman which ruled the southern isles by the threat that she could be married off to create a rival claimant. (1645)

We take notice of the dire situation befalling Their Imperial Highnesses The Ladies Isabella, Miranda, Esmeralda, Azardokht, Nulufar, Samira, and Alissa, The Lords Daniyal, Frederik, and Royston, and Their Royal Highnesses The Khanum and Khan of Cabbagefall. - 11 Muulantooqu 1648

Whilst the disappearance of the final vestiges of Goldshire's rule in the year 1650 might have been welcomed by the local populace, the restoration of the House of Osman, along with an immediate hike in the tax burden from 2% of GDP as a constituent of an Imperial State to 10% as a dominion, was not. The Emirate also exposed itself to an unexpected financial liability to the tune of 489.4m Erb for the unorthodox incentive offered to former members of the Jaysh al-Sathrati to rejoin the new formation being raised on the island.

The Lords and Commons of the Islands, in light of these factors, were loath to render their submission and fealty. Instead a movement began to gather apace to elect a High Reeve from amongst the nobility of Amity and a Great Chieftain on Mirioth to make representations on behalf of their "ancient liberties" to the Regency in Shirekeep. 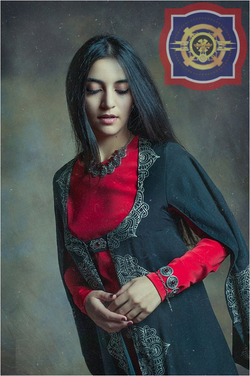 Azardokht in 1654, at the time of her departure from Sathrati. Photographic portrait prepared by the Zinkgraven Stewardship in order to entice the Osmanids of Raspur into accepting a kinship marriage for the Khanzada.

Under the terms of the Family Compact of 1654, Isabella Simrani-Kalirion, as the ultimate victor in the localised power struggle between the wives, daughters, and cousins of Tokaray al-Osman, upheld her claim of title to the Emirate and retained control of the Jaysh al-Sathrati. Her niece, Azardokht, being the most strong-willed of the surviving rivals, received a sinecure within the Nationalist & Humanist Party, recognition as Patroness of the Shirerithian branch of the House of Osman, and the ward of Grifonagaat for which her title was confirmed in the first day of Silnuai, 1655. She was also released from her engagement to Isabella's son, the underlying cause of her revolt and defiance of her domineering aunt. In reality however, as one of the foremost members of the defeated party, Azardokht was expected to quit the islands and find her fortunes elsewhere. It was fortunate therefore that the resumption of war with Jingdao had given the latest Steward, Waldemar Zinkgraven, cause to send Azardokht as a member of a delegation dispatched to the faltering Raspur Khanate, to shore up its decrepit ruler, Tahmaseb II Osman.

Reported to have succumbed to arsenic poisoning in 1709 AN. A number of domestics were subsequently burnt alive at the stake after confessing to their complicity under judicial torture. In spite of the confessions, the ultimate originator of and motivation for the assassination remained unclear for several years thereafter.