Founded in 1527 by King Arkadius II of Batavia.

Game of the Batavian Throne

In order to describe Batavian ancient history, the university started the project Game of the Batavian Throne. This project knows the rules of the game and gives a framework to the stories. 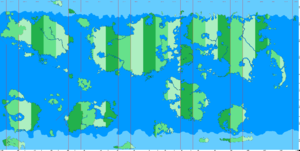 The initiative for the Coordinated Micras Time was taken by the university. The first setup for time zones under the CMT system was published in 1669 AN. With this project, the university is internationally known. Since 1709 AN, the official map has been maintained by the University of Akbarabad.

The lecture: the power of the King

The power of the King, that is something that Batavia dealt with recently. Where the Conservatives are silent on the gay parade, the Republicans are silent on the question of the added value of an elected Head of State. Because I believe that the desire for a republic is not due to our king, but to the desire for power. But what is that power and how much power does our king actually have?

We are going to go through Batavian history, not the fictional history, but the played history of the past two years. On 9 February 2006 Batavia was founded under the name 'Free Batavian States'. The name suggests that at that time Batavia was a free state, where the government allowed its citizens freedom without much interference. That was certainly the case, but when the government had to act anyway, it became clear what that government was. The government was the regent and the queen. A two-headed government, which actually held all the power. Although it was in the interest of keeping the bourgeoisie satisfied, all power was in the hands of the regent and the queen.

It turned out that this freedom and this aristocracy did not work. The influence of the people was too small and the lack of structure prevented the people from wanting change. The Free Batavian States ceased to exist and the First Kingdom of Batavia came into being. Improvements were minimal because, legally speaking, things had changed, but in practice it was very disappointing.

After several moments of crisis, democracy was born out of aristocracy. The Second Kingdom of Batavia was born. The most important thing that changed was the power of the people, this happened in the form of parliament (House of Commons), although there were still many things that needed to be changed constitutionally. However, if one looks at the past year from 4 January 2007 onwards, Batavia has undergone an increasingly democratic development, which has made Batavia an activity that has continued.

Our King has lost more and more power as a result of that democratisation. The actual power lies with the House of Commons, and the King cannot simply legislate. Let us look at the current system:
The House of Commons:

The House of Lords:

There will be people who think that the king still has a lot of power with this. But let us separate power from influence. Even though the King is in a position to do certain things, he has proven that he does not just do business, but discuss it with the House of Lords.

Judges are also appointed by the King. This does not require legal consultation in the House of Lords. Yet the King does. This way he gets a supported decision and a judge who is supported by several. Meanwhile, the King no longer has to appoint counselors; the government does so in person of the minister. The art of the judicial system is then to make as much separation as possible between the judiciary and politics.

State representatives such as ambassadors and diplomats are appointed by the King. Again, the King discusses the matter with the House of Lords. Certainly useful because approval must be given by the House of Commons.

The Royal Decrees are usually issued to appoint someone. There are few decrees that are about anything else.

The King is obliged to sign the laws. The regent may do this in his place, but actually the king has to sign every law. The King's signature has an important value. It works in such a way that a law has been passed by a majority in the House of Commons. There will be people who do not like the law and vote against it. Because the King signs the law and his or her role as Head of State, everyone is obliged to regard the law as valid, regardless of his or her opinion.

In my opinion, the King has proved to be a democratic king, who has influence but no real power. Batavia has evolved towards a situation in which the people have de facto power and the King has more influence than power on balance.

If I would give the king a grade, then certainly a good 8. (on a scale starting from 1 bad to 10 excellent) And why not higher? Well things can always be better, who has ever had a 10 at drawing? Nobody can, because they can't. There is always room for improvement.

The Chronicles of Batavia (Batavian: Kronieken van Batavië) describe the non-fictional history of Batavia from its existence in 1513 AN until halfway through the reign of Queen Fränzi-Ferdinanda. The book was written in Batavian and so far has not been translated into the Common Language.