Game of the Batavian Throne

The Game of the Batavian Throne is a project from the Royal Julius Civilis University. The project includes a creation of stories to illustrate the fictional history of Batavia. In addition, many fictional histories had already been worked out to a greater or lesser extent on Batawiki, these stories then being incorporated into this project. A number of game rules and frameworks have been worked out.

The intention of this project is that several Batavians contribute to this project. With the development of places and regions. 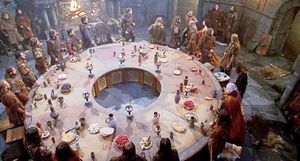 The round table of Paravel

Among the frameworks is the central theme, which consists of:

The round table of Paravel
There is a round table on the island of Paravel, in the castle of the same name. That round table is a neutral place for all Batavian rulers. At that table, those rulers can talk to each other safely and equally.

The Lion Throne
The Lion Throne is located in 's Koningenwaarde. This apparently simple chair is the seat of the person who should rule over all the Batavian countries. Of course that will not work if there are others who claim the throne.

A boat floats on the waves of the sea. Steerless and the occupant seems lifeless. An arm hangs limply over the edge, while the boat goes back and forth to the rhythm of the sea. Besides the young man, the boat is empty, even an oar is missing. No food, no drinks on board. The young man's clothes are soaking wet, dirty and torn.

Where does this young man come from? Why is he alone in a boat? Why does he not have any food or drink? What happened?

A young woman is running through the forest. Her blond hair is fluttering behind her, while she skilfully jumps over the fallen trees and winds among the trees and shrubs. At a brook, she means not to stumble over the smooth stones. On her face you can read that she is frightened.

The trees seem to give way and a lawn takes over the woody terrain. And a small village can be seen in the middle of the lawn. Houses together, around an open space. The houses are surrounded by an earthen wall and a palisade. At the only entrance of the village are a few men dressed in leather and animal skins, a round shield, a spear and a helmet. They look with curiosity at the young woman approaching them. They recognize the young woman and want to arrest her. But the young woman avoids the men and runs on to a house that is prominent in the open space in the middle of the village. An older man comes out of the house because of the noise.

The young woman stops for this man and after she catches her breath, she tells what is going on. Not much later the young woman, the older man and six other men leave the village. They follow the route the young woman previously took in the opposite direction. And when they arrive at the beach, the young man's boat has just washed ashore.

Days pass, the washed-up young man has since been patched up again, only communicating is still difficult since he does not speak the language of his hosts. The young woman from whom he has learned that her name is "Adalheidis". He was able to make it clear that his name is "Silvius". But the language barrier is difficult to bridge. To be able to tell something about what happened to him, he makes cutouts in wood. One evening Adalheidis tries to extract something from a story. A mountain with water around it, then strange buildings at the foot of that mountain. And in the sea all kinds of strange vessels, on which she gestures or the boat that washed up was a vessel like that, after which Silvius portrays that his boat is only a small vessel and that he has cut it out is many times larger.

Then Silvius cuts all kinds of arches from the top of the mountain. Something that came out of that mountain, Adalheidis does not understand what that could be. Silvius points to the fire and stones, yet she does not understand. Silvius continues to portray, by running around and screaming, as if he was reliving it.

Weeks later Silvius could tell the story better. The mountain erupted, the strange city was the big city "Aravis". That city was built around the water source, of which it is said that the first man was made at that water source. "The island was called the" good island ", or as said in our language" batawjō ". We had everything: gold, silver, diamonds, pearls, you name it. If the island itself did not have that, our ships sailed all over the Micras to collect those things. But now ... "Silvius said. “Now the city is lost, because the mountain erupted and the fire consumed the city. I was just able to save myself, but many people are ..." He burst into tears. Adalheidis comforted him.

The chief of the village and father of Adalheidis heard the whole story and let horsemen go through the lands to all the tribes in the western land. From Ingilo to the tribes in Dietsche areas. On the day after the third full moon, all captains gathered on the "Paravel" peninsula. Silvius went with Brant, the father of Adalheidis. There were more people who had fled the island of "Aravis", they recognized Silvius and were happy to see him. The story of Silvius was thus quickly confirmed. And even more so, because one of the refugees even stated that the entire island disappeared into the sea. Everything is gone, no other survivors.