"’s Koningenwaarde lies at the Linge and is split by it into three parts. Important buildings, silent witnesses of the glory of the Batavian Empire, are present here more than anywhere else in the world. Economically the City is essential for any monarch who wants to wage war or claim any power over the Batavian people. Goods and wealth come and go. Anything you can dream of can be found in the one of stores of this Batavian capital."
—Description of a capital, Translation of Toeristische Leidraad voor de Bataafsche Landen, 1578

In the old town, the river Zwette flows into the river Linge. Fictionally, 's Koningenwaarde was founded on the north bank of the Linge, but then grew so large that several villages near the then city became part of the expanding city. These former villages are now city districts, such as Nieuburgh and Vredebregt. The most important port area lies to the west side of the city, because the river Linge flows into the King's Bay just a few kilometres west of it. 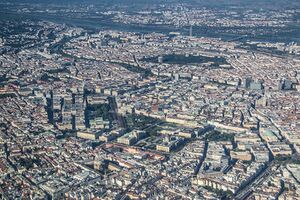 Since the founding of Batavia in 1513 AN, 's Koningenwaarde was not always the capital. Other cities were the temporary capital, in chronological order:

Despite this list, these cities were never designated as capital on the MCS map. As a result, some people see this list as illegal and purely for fictional reasons.