"These noblemen have laid the foundations of the present-day Batavia. It would suit the citizens if they keep honouring those honourable gentlemen and ladies, and grant them the privilege to keep governing.


It is a pity that one so easily forgets the foundation principles of Batavia, which is a monarchy of nobles."

Jodocus van Haltna (1452 - 1534) was one of the more influential and controversial citizens of Batavia during the early 16th century. In his role as Duke of Haltna, he gained an important position at the Royal Court in 's Koningenwaarde in a period when Batavia as a nation was non-existing. He succeeded in gaining the momentum and won over the support of many important squabbling nobles. Utilising his influence, he was promoted to Regent of Queen Faya I. In 1513 AN he finally succeeded to centralise the largest feudal states within the Batavian Territories as autonomous States, effectively establishing the Free Batavian States. 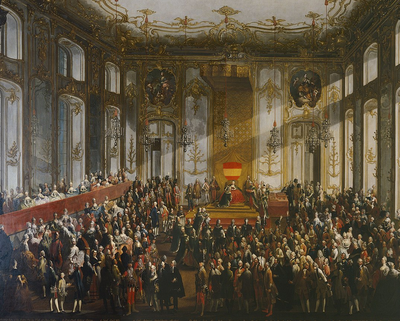 The most important nobles were gathered in councils to represent the interests of the monarchy. From these councils, Jodocus van Haltna would select a group of important nobles into a Edelenregering, a noble's cabinet, to reform and rule the nation from 1519 AN onwards.

Born in a noble household, he was known to be a staunch proponent of absolutism and noble privileges. His connection in a privacy scandal in 1522 AN, which would become known as the van Haltna Crisis, would mean the end of his active political career. This scandal, combined with the necessity to strengthen the parliamentary system, made from the Regent a much-critised and controversial subject between historians, especially during the early days of the Second Kingdom of Batavia.

The Regent continued to play a minor role in Batavian politics. The sudden flight of his personal friend, Arkadius I, in 1523, weighed heavy on Jodocus. His ideas heavily influenced the party Nieuw-Kapitalistisch Rechts (New Capitalist Right), which would become the main opposition party between 1525 and 1527 AN. However, his influence began diminishing as the several elected cabinets proved to be more and more competent to aid the King.

A personal humiliation came in 1528 AN when a young palace guard - not having recognised the former Regent - kept him from entering the Paleys van Leopold I.

From 1530 and onwards, rumours among his servants began to spread about a depression and alcohol abuse. He was eventually found death in his residence on the 8th Wintermaand, 1534 AN. According to some doses it was as a result of an overdose.