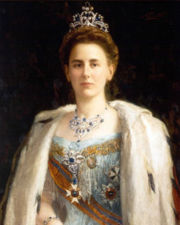 Faya I became one of the most important political leaders of the Free Batavian States, as the country remained an absolute monarchy.

The Free Batavian States (Vrije Bataafse Staten) was the predecessor of the Kingdom of Batavia. After several ages of feudal clashes between the principalities, duchies and counties which made up the Batavians Territories, the Regent of the Kingdom of 's Koningenwaarde - Jodocus van Haltna - emerges successfully as victor over the nobles whom advocate a loose confederacy of Batavian territories. He united the many feudal states into larger States (the future Gewesten) and reconfirms the dominance of the House Veronique as royal family.

His actions led to him being fondly remembered as the Father of the Fatherland, even after his reputation got tarnished by historians in the latter part of the First Kingdom and early days of the Second Kingdom because of privacy scandals.

While uniting the many small states into larger ones was a victory for the unionist cause, Jodocus van Haltna was a staunch opponent of democratisation. The goal of the government in 's Koningenwaarde had never been to 'democratise' the masses. The first months of the new government were plagued with minor riots and crackdowns against rebellious nobles (whom saw their power diminished). The most important nobles received a post within the new government (the most influential ones became governors of the States).

Laws were passed with the goodwill of the monarch, who signed decrees. In practice, this often meant that the Regent acted on behalf of the Queen. The regency under van Haltna ended in 1614 AN, but his importance was still felt. Queen Faya I was known to ask for the advise of her former Regent rather frequently, to the annoyance of several of her less entrusted ministers.

A National Assembly, meant to assure the people of a voice, saw the first establishment of parties. With power in hands of the Royal Court and the State administrations, this institution acted more as a rubber stamp institution. The Stes enjoyed a rather large amount of autonomy but were often hindered by radical movement, whom tried to destabilise the local authorities. This would eventually lead to reforms and the establishment of the First Kingdom.

Because of her popularity, one of the rooms within the government complex at 's Koningenwaarde is called the Fayazaal. 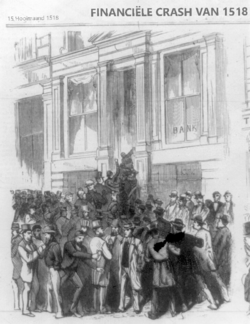 The crash of 1518 is often seen as the start of the end of the Free Batavian States.

While the new nation was only recently unified under a stronger central government, the States were still dominating the ministries. Nobles who had lost their own little nation were now in charge of State Departments, which often led to infighting. Corruption, thanks to harsh punishments from the Royal Court were limited, but the purchase of functions was not very rare (especially not in the frontier provinces). Nonetheless, even with the limited freedoms, the citizens enjoyed the advantages of being part of a large customs' union, free trade and free movement (even while it was still limited to certain heights).

Historians see the outbreak of the crash of 1518 as one of the major contributors to the collapse and reform of the Free States. What began as a crop failure grew into a full fledged financial crisis, which could only be solved after a national currency was introduced. By then, some states had accumulated an enormous state debt, leaving the Edelenregering (a committee of nobles) in a comfortable position to force the reforms through.