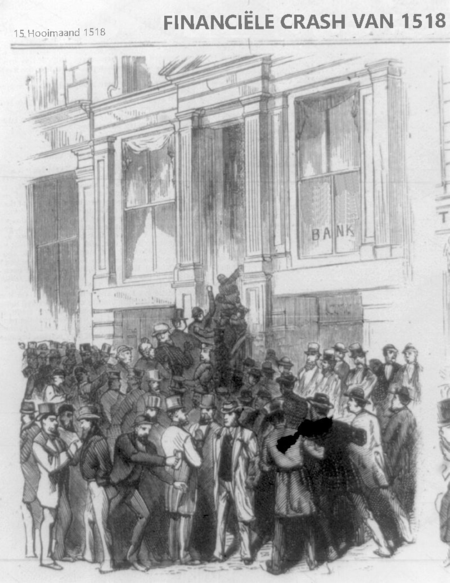 The crash was followed by a bank run in most Batavian States and led to increased pressure on the central government to centralise more power.

The Crash of 1518 was a stock market crash in the Free Batavian States, and was the worst crisis in the Batavian economy during the early sixteenth century. The crash was triggered by the collapse of the Boerenorganisatie van Ingelheim (Farmer's Organisation of Ingelheim). Disappointing harvest for a second year in row had brought many farmers on the brink of bankruptcy in the year before. The Boerenorganisatie had aided by lending those farmers sufficient funds to stay afloat. Further crop failures led to increased debts for both the farms and the organisation.

The crash led to a recession which was worsened by the inability of the State of Ingelheim to come to the farmer's aid. The States had, in that time, full authority over minting their own currency. The governor, Geert Zegsman, therefore ordered the printing of an additional 7,800,000 Ingelheimse Daalders to relief the farmers and land owners. This created enormous inflation, and the crisis spread to other States, where trust in both the state and central governments plummeted.

The crisis lasted until the end of the decade. It only ended with the establishment of a stronger central government, the First Kingdom, in 1520 AN. It's often seen as one of the contributing factors for the end of strong State autonomy.