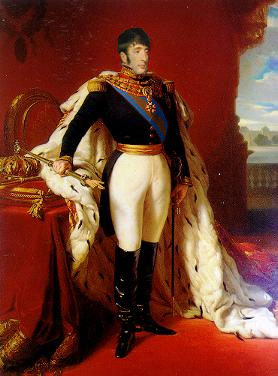 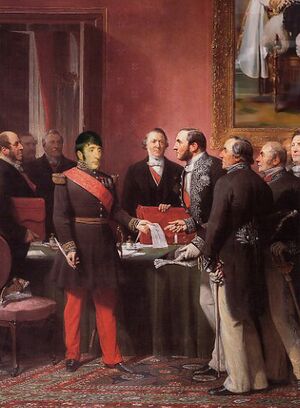 A painting by King Arkadius II at a cabinet meeting

Arkadius II (Vinandy, 1505 - near Madison Isles, 1567 AN), fullname: Arkadius Hendrik des Vinandy, was the King of Batavia between 1524 and 1567. During his reign, Batavia became a superpower in the micronational sector. He was described by many a politician as a rock in the surf, which should not be underestimated, especially in the turbulent Batavian politics. He reigned until his death in 1567 AN.

The chaotic year of 1523 AN had led to the voluntary departure and resignation of his older brother, King Arkadius I. While he himself did not express any interest in succeeding his brother, Arkadius was addressed at the end of that month by then Prime Minister Jonas Windsor. After a short conversation between the two gentlemen, it was decided that Arkadius would indeed succeed his brother, which eventually happened on 4 January 2007 (Coronation Day). The cornerstone of the modern Batavian State (the Second Kingdom) was thus laid.

In 1534 it was announced that Arkadius was engaged to Countess Charlotte de Bourbon, gossip had been going around before. On Coronation Day, the king announced that the wedding day was scheduled for 16.VIII.1537 AN.

The wedding took place under the great pleasure of the people. Archbishop Pius I took the vow of marriage, after which there was a celebration in the Royal Palace. Immediately after the feast the couple went abroad for their honeymoon. Now, after their return, there is still a great secret where the bride and groom have been.

In 1552 AN Antonius was born and this the intended heir to the throne.

In 1525 AN, Arkadius II celebrated its reign under the loud cheers of the people. With one year of rule he became the longest reigning (non-fictional) monarch in Batavian history.

In the capital 's Koningenwaarde the stadholder had organised a big feast with everything on it. At the same time there were festivities in the capital of Ingelburg and some small parties in the rest of the country.

It is generally accepted that the long reign, accompanied by political stability and the growth of Batavia into a strong and influential power in the sector, was a success. In Batavian art, the King was more than once central to the works of art being made. The stability that the nation experienced provided not only a breathing space for politics but also for further development in the fields of culture, education, art and, less so, economics.

The King celebrated Arkadius Day every 16 July, a holiday celebrated in a more modest company at Château des Vinandy, his original home.

On 18 August 2010, Batavia was startled by the death of their monarch. The King was with his family on a plane to Arcadia (city) to attend the horse races. On the way there his plane was shot out of the sky by a rocket from a submarine of the Imperial Empire. The King died together with his wife and child. A three-day mourning period was inserted into the country, although it was extended to 12 days in several regions (under pressure from the Vinandists).

After his death he was (temporarily) succeeded by Regent Jeroen van Veen. A heir to the throne is still being sought.