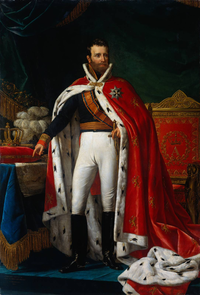 As the Batavian Throne had become an office of high importance and influence throughout the years, several parties and factions fought for it: the Ultraroyalists supported the rise of a Kalirion to the Throne, the Radicalen were divided between Vinandists and Windsorists, while the syndicalists preferred the creation of a republic. To rally support from all sides, the office of Staatsholder (Staatshouder) was established with the Blanckenhof Accords of 1685. Salome, who acted as Staatsholder, was eventually replaced by Hendrik V in 1691 AN, ending the short-lived personal union between Batavia and Shireroth.

The regalia can be viewed at the Koninklijk Paleis of 's Koningenwaarde in the Edelenzaal.