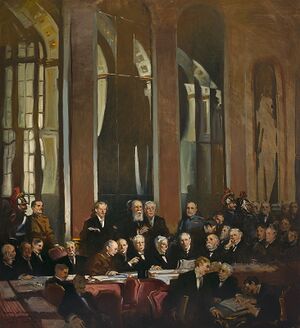 A joint session between the two Huyzen of the Staten-Generaal and the Royal Cabinet in the Mirror room of the Blanckenhof Palace.

The Blanckenhof Accords (Blanckenhof Akkoorden) of 1685 AN were hosted at Blanckenhof Palace. The location was chosen to avoid that a mob could pressure the political elite into approving radical laws. A joint session of the Lagerhuis and Hogerhuis met in a meeting, hosted by prime minister Paulus de Withe. The representatives discussed several political issues which had caused the - still ongoing - Batavian Revolution. The possibility of an invasion of Batavia by its neighbours was addressed, while the vacant Throne also became a serious concern for the government.

At the start of the Batavian Revolution, the government had neglected to act in the best interests of the democratic elected Lagerhuis. With tensions rising high, this ended with a series of syndicalist rebellions. Jacques Montrarde, who had acted as prime minster, resigned and was replaced by his colleague, Paulus de Withe. With the newly established Batavian Commune as his main adversary, he embarked on a political and diplomatic campaign to assure the rights and liberties of the people and elected representatives. His belief in the necessity of a strong nobility, made him a proponent of restoring power to the Hogerhuis. 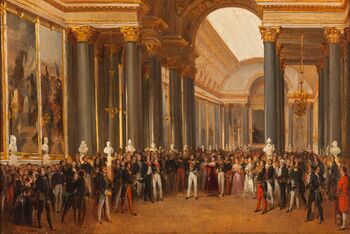 Tensions increased as nobles and elected representatives were unable to chose a Batavian King. Eventually, a new position of Staatsholder de facto replaced the position of king.

Having gathered the two Huyzen of the Staten-Generaal in one, isolated place, prime minister de Withe hoped to enact constitutional reforms which both strengthened the democratic traditions as the enshrined rights of the nobles. Having pushed for an equal position for both Huyzen in the Staten-Generaal, the nobility was assured a strong position within legislation. Elected representatives henceforth were assured free elections. With this issue out of the way, the joint session agreed to fight the syndicalists at all costs.

News of Kasterburg leaving the United Benacian Republic and rejoining the Kingdom, with the Treaty of Feldkirche, was met with enthusiasm. This enthusiasm grew even further more when news reached the representatives' ears of a successful Kasterburger campaign against syndicalist strongholds in southern Batavia.

The position of king, which was a difficult issue due to the several royal claims, was seen as a burden and obstruction to unite the nation. With this in mind, the Royal Cabinet proposed the establishment of the title of Staatsholder. Paulus de Withe concluded that the Staatsholder would wear a crown, hold a royal title but would simply not be called what he (or she) actually was: a king in all but name.

Kalirionists, Windsorists, Vinandists and even a small group of Veroniquests (supporters of the House of Veronique, which was believed to have become extinct) vowed for the Throne, and an impasse was reached. At the same time Royal Cabinet looked with concerns to the nation's eastern borders, fearing an invasion of its vulnerable borderlands. Several ministers plead for hours to look for a Staatsholder who had some influence and power on the international theatre.

In the end, after several nominations, a delegation of nobles voted in favour of the Kaiseress of Shireroth, Salome, as new Staatsholder of the Kingdom. A number of dignitaries under former prime minister Jacques Montrarde was sent to Shirekeep to propose a personal union.

The proposal was eventually accepted, with Salome ascending the Throne as Staatsholder in 1686 AN.