This article is about the deity. For the Kaiser of Shireroth, see Kaiser Ayreon. For the dynasty, see Ayreon-Kalirion 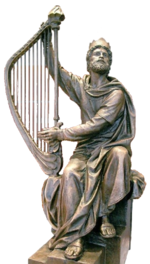 Ayreon (Elw erioon "(god) of the Lions"; old spelling Aireoon) is an transcendi in the Cedrist Faith and a Guiding Holy in the Holodomatic School.

Practitioners of the Cedrist Faith regard him as a water spirit, descended from Elwynn, who became familiar with humanity and travelled across the lands to teach people music and the arts.

The fishing cat, a now-rare wild cat that roams much of the length of the River Elwynn, is closely associated with Ayreon. Legends about fishing cats, either as mischievous mundane creatures or as the physical form of a trickster spirit, are found all along the River Elwynn Valley, the fishing cat's historical distribution. Due to several long decades of pollution, along with the various ecological disasters (e.g. Brassicosis Crisis), the fishing cat's current distribution is broken up into isolated regional populations. The species has also been pushed into a vulnerable status due to hunting.

More recently, efforts have been made in Shirerithian and Ransenari territory to establish protected wetlands in the Red Elwynn Valley.

Ayreon is popular among initiates of the Holodomatic School in Eastern Benacia. He is appealed to on matters of fertility and ingenuity, healing, and inspiration. As a Guiding Holy, he is also appealed to protect the way for initiates to reach out towards the Ultimate.

Much of his worship is drawn from Cedrist mythology and motifs, reconfigured to fit with Holodomatic practices, but this version of Ayreon has been thoroughly infused with the imagery and importance from Iacchis, a popular Kaikian Antican deity. This makes Ayreon a more significant figure of worship in the Holodomatic School than in the Cedrist Faith, where he played a relatively minor role alongside the various gods of war and authority.

In keeping with the influence from Iacchis, Holodomatic depictions of Ayreon tend to be cleanshaven and vary between masculine, feminine, and androgynous. This Ayreon makes use of masks and flowing clothes to facilitate shapeshifting and disguises.

As part of the Holodomatic School's outreach into the Laqi population in Brookshire, the Laqi cultural hero, Atre'u, has increasingly been depicted as an incarnation of Ayreon. This localized version of Ayreon leans more heavily on his trickster nature.

Atre'° is credited with inventing the dagger and teaching Laqs in the art of knife fighting and steel forging. His forging techniques, passed along the centuries, results in mottled and banded patterns in the steel, called "Atre'u's Petals" (RL. Atre'u i Tḥempeh).

Atre'u own dagger, named "Flowing Fire" (RL. Ĉeremaś°'), was forged directly from the elements of water and fire. After his death, his dagger continued to be wielded by each Laqi Sovereign until the end of the Dawn Years, when it was lost and the Laqi clans became divided and scattered across Benacia.