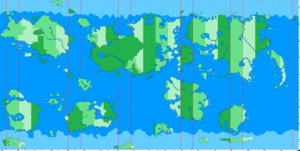 Coordinated Micras Time is a renewed initiative (organized and maintained by the Royal Julius Civilis University) intended to reach a standard of time zones on Micras, originally influenced by the time zones laid out under the Pallisican Scientific Standard Calendar. The first setup for time zones under the CMT system was published in February 2019.

The adjustments to time zones that have been processed:

Further, Shireroth is working on implementing the Coordinated Micras Time.