Adopted in 910 WG (6371 ASC), the Pallisican Scientific Standard Calendar (PSSC) is the official calendar system of Passio-Corum. Adopted as a replacement for the Weran Gherfan calendar system - itself unofficially adopted in Hamland around 5306 ASC - the PSSC determines the current year by dividing the current year according to the ASC calendar by the number of days in one Micrasian Orbital Period. The system was adopted by Passio-Corum during the reign of Oracle Opyeme Amor, on the basis that it reflects better than other calendar systems a modern, scientific understanding of Micras and its place in the Atos System.

To better understand the Pallisican Scientific Standard Calendar, please refer to the table below:

The greatest advantage of the PSSC system over others is its extremely high degree of precision. Unlike others, which have historically only provided information regarding the current year, the Pallisican Scientific Standard Calendar is able to provide specific details regarding not only the year, but also an exact astronomical time and date on Micras. The process for determining such information is outlined in the table below.

The astronomical year, which is equivalent in length to the period of one orbital year, can be divided according to the Pallisican Scientific Standard Calendar into three, 61 day months. These sixty-one day months correspond to the three major seasons and their impact on agriculture. The first month of the year, according to the PSSC, corresponds to Spring, or the planting season, the second month corresponds to the Summer, or the growth interval, and the third month corresponds to Autumn, the harvest season. This calendar system does not recognize winter as a season of its own.

Researchers of the Pallisican Scientific Standard Calendar have determined that generally, the ASC calendar advances at a predictable rate which is twice as fast as that of the PSSC (1 Year PSSC = 2 Years ASC). What is unusual about this relationship is that once every ten years, the two calendar systems advance at the same rate, rather than at different rates. This anomaly, which occurs progressively later during each ten year cycle, is not currently understood by researchers. The following table provides an overview of the phenomenon.

A phenomenon similar to the Time Sync Anomaly has been observed in Shireroth, where researchers have postulated the theory of Temporal Haemorrhaging. 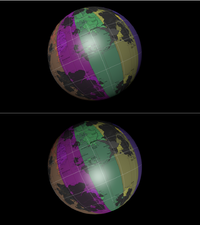 By the time Atos passes over the Skerry Isles during the northern Summer (top), night has already begun to fall across much of eastern Corum. During the southern Summer, however, eastern Corum remains in daylight for at least another hour (bottom).

A map of the world's time zones, according to the Pallisican Scientific Standard Calendar.

The Pallisican Scientific Standard Calendar recognizes the existence of twenty-four distinct time-zones around Micras. For its part, the Greater Pallisican Trade Association claims territory extending across ten of the world's time zones, from the Eastern Dyre Straits Time Zone (EDST) to the Western Madison Isle Time Zone (WMIT). The nation's capital city of Lucien, however, lies in the Corumian Standard Time Zone (CRM).

In 2019 the times zones laid out under the PSSC system were appropriated in the development of Coordinated Micras Time.

A map of the Micrasian sky with latitude and longitude overlaid in green, and timezones overlaid in red. 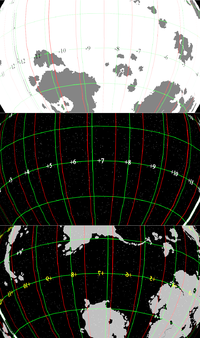