From MicrasWiki
(Redirected from Atos System)
Jump to navigationJump to search 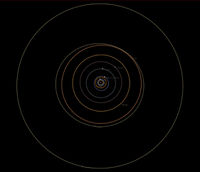 Pictured: The current model of the Atos System, as mapped by the New Zimian Space Exploration and Settlement Agency.

The Atos System is the stellar system in which the planet Micras exists. The following data is a result of many years of significant effort by Bassarid scientists genuinely seeking to develop and improve resources for scientists and researchers around the world and is not recognized by the international community at large. Of particular dispute is the existence of the moons of Thalassa, Nephele, and Glinos, and the multitude of asteroids which comprise the system's major asteroid belt.

In the 41.50s PSSC, the Bassarid government clarified its claims to this research, citing a desire to improve respect for the wishes of those nations and world leaders who regard Bassarid contributions to the global community as anathema.

Non-Bassarid research regarding the Atos System can be found at the Micronational Astronomy Society. All those who seek to avoid relying on any Bassarid research may instead rely on the abundance of data compiled over many years at that location.

The Atos System as it is currently understood, was defined in the early 32.80's PSSC by researchers working for the New Zimian Space Exploration and Settlement Agency. Current models of the Atos System also reflect research completed by scientists in Mercury.

The following is a list of the largest asteroids found in the asteroid belt which divides the Inner Atos System from the Realm of the Gas Giants. Most of the asteroids take their names from Bassaridianism, one of Micras' most important religions. One of the asteroids is named after the celebrated Craitish footballer Freddie Gaärsen, while another is named for the alcoholic beverage made from the national fruit of Craitland.