From MicrasWiki
(Redirected from Pallisican Religion)
Jump to navigationJump to search

The Pallisican Religion, or Pallisicanism, is a religion, or way of life, which originates in the region of Passas, in Southwestern Keltia. Although a relatively new religion in contrast to other belief systems found around Micras, Pallisicanism is one of the notable religions of the modern era, insofar as the religion plays a central role in the political, economic, and social structures of the Realm of Passio-Corum, which spans across the world's Eastern hemisphere. The Pallisican religion is regarded as a fusion of diverse kralian, Hammish, and Pallisican belief systems, with no formal founder. The synthesis of the Pallisican religion is believed to have occurred between the years 400 and 550 WG.

Prominent themes represented in Pallisicanism include (but are not restricted to): an emphasis on the universal triality between the forces of Order, Chaos, and Mystery. The Pallisican religion maintains that everything in an existence is a reflection of the relationship between these three forces, which themselves represent the three components of God, which became the three forces in the first moments of the universe.

Today the religion maintains its strongest presence in Northern Corum and Southwestern Keltia, though adherents to the religion can also be found in Southern and Eastern Keltia, Eastern Eura, and Southern Corum. That said, Pallisicanism can be regarded as the predominant major religion of Micras’ Eastern hemisphere.

Today, the religion's most prominent beliefs relate to the relationship between the forces of Order, Chaos, and Mystery (or nature). These three forces, which are known within Pallisican traditions as the Oversouls represent the three components of God, which was dissolved into the three forces at the beginning of existence. This tradition maintains that the universe began when the singularity of God underwent its first and only change. This fundamental change of God marks the beginning of time, or Order. At the moment that time began to progress, the Pallisican religion maintains, God ceased to exist. With this cessation of the existence of God, or perfection, the force of Chaos was introduced into the universe. With the progression of time, in other words, came the development of chaos. So it is that according to the Pallisican religion, time, or Order, naturally leads to the development of Chaos. The more time occurs, the more chaos develops. Thus, the tendency of the universe – as it is defined by Order rather than by perfection – is towards Chaos; the universe becomes more chaotic over time. That said, the Pallisican religion maintains that this natural tendency of the universe can be reversed by an awareness of the third fundamental force of the universe: mystery. Mystery, Pallisicanism holds, is the force which compels the restructuring of Chaos into Order, and it is the medium through which that restructuring occurs. Indeed, the Pallisican religion teaches its adherents to gain an awareness and a mastery over the force of mystery, through science, philosophy, and industry, in order to become agents in the struggle against the universal force of Chaos. This is the basis for all Pallisican religious practices. 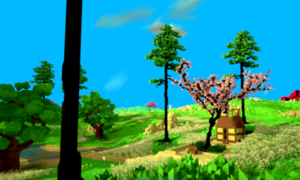 A small shrine honoring the Enlightened Ones overlooks a shallow creek.

The Pallisican religion maintains that among the populations of the beings who possess the intellect (humans, kralians, aead) to come to an awareness of mystery, there occasionally arise individuals who possess a deeper, truer understanding of the nature of the relationship between the Oversouls. These individuals, known as Enlightened Ones, are believed to be capable of expressing truths which speak to the nature of existence itself. Different belief systems within the Pallisican religion generally recognize different sets of Enlightened Ones, though certain individuals, such as Jetaln and Alezu, are recognized as Enlightened Ones by all Pallisican faiths.

Contemporary Enlightened Ones are commonly regarded as Oracles.

The various belief systems within the Pallisican religion, otherwise known as the Lesser Paths, can be categorized into three broad groups known as the Higher Paths. These are, the Gateway Path, the Sunlit Path, and the Humble Path. The first of these three Higher Paths, which originates in the region of Western Passas, teaches that the way to enlightenment - to a perfect awareness of the relationship between the Oversouls - is through a lifestyle based around military disciplines. The second of the Higher Paths, the Sunlit Path, is the most mystical of the three paths. This belief system, which originates in the region of modern Zimia, places significant emphasis on ideas surrounding reincarnation, and upon the study of dreams and meditative states. The third of the Higher Paths, which has its origins in Eastern Passas, encourages its followers to reject traditional concepts of enlightenment, and to instead pursue forms of personal fulfillment.

The most commonly practiced type of all Pallisican religions, the Sunilt Path enjoys widespread appeal amongst the nation's vocal working class. The Darkened Path in particular enjoys extremely widespread support throughout Passio-Corum. 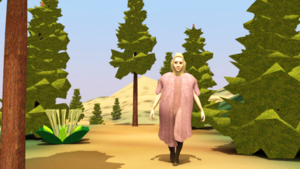 A young practitioner of the Darkened Path participates for the first time in an annual pilgrimage to the city of Cannassas.

Variant Paths are religious belief systems which share many characteristics in common with the Pallisican Religion, but which cannot formally be categorized under any of the existing Lower Paths. Variant Paths commonly emerge beyond the formal borders of the Greater Pallisican Trade Association.

Oversouls and the Atos System

A core tenant of Pallisican religious philosophy is the idea of the Inner World, a spiritual realm which exists within the souls of all practitioners of the religion. The Inner World, Pallisican teachings hold, is a realm which perfectly embodies the ideals of society and nature, and which is beyond the influences of the Oversouls. Indeed, the Inner World is regarded within the Pallisican faith as a realm governed by a type of Godly perfection, not unlike that which existed before the beginning of the universe. This realm, which is accessible only through dreams and meditative states, is regarded as the Realm of the Enlightened Ones; Pallisican tradition maintains that this realm can only be entered at will once a practitioner of the faith has come to an awareness and mastery over the force of Mystery. In addition, the Pallisican religion also teaches that the Inner World represents an alternative to the cycle of reincarnation. Once a person attains enlightenment, they may enter the Inner World at their discretion, and thus they may choose be freed from the cycle of reincarnation to which all practitioners of the Pallisican faith are subject until they understand for themselves the nature of the relationship between the Oversouls. The religion teaches that many Enlightened Ones have chosen to reside permanently in the Inner World, rather than continuing to be reincarnated, though some reject the promise of paradise in favor of the opportunity to continue teaching the non-enlightened.

Some Pallisicanist belief systems teach that Micras, and indeed the whole Atos System represent the Inner World of higher conscious beings, though such beliefs are officially rejected by most practitioners.

All people who experience a noble death while actively engaged in the process of promoting Pallisican interests are regarded as Martyrs of Genesis. To this end, such people are regarded as having been specifically chosen by the Host Spirit - usually without their knowledge - to die a meaningful death. Most notable amongst the Martyrs of Genesis in recent times are the Pallisican and Haifan soldiers who lost their lives in the conflicts surrounding the War of Lost Brothers.

Although they are not commonly the subject of worship within the Pallisican Religion itself, all Haifan Martyrs of Genesis are regarded within the Stripping Path as semi-divine figures. The worship of Martyrs of Genesis is particularly pronounced amongst the members of the Guild of the Cult of Maskmakers.

The Pallisican religion is indirectly, officially governed by the New Zimian Temple Court, an official agency of the Council of Courts, which serves to enforce religious and moral law within Pallisican society. That said, the religion is directly governed by the Houses of Pallisican Chelkra, the legislative body representing the New Zimian Temple Authority, which itself serves to unify the Higher Paths under a common banner.