From MicrasWiki
(Redirected from Ynys Fforst)
Jump to navigationJump to search

The Coast of the Elves is one of Calbion's most important colonies in extending control over the Great Western sea, where it is locked in a power struggle against Raspurid naval forces. In 1694, Calbion abandoned the colony Eastern Keltia, and relocated resources to the Elven Isles, where it aims to consolidate the entire East coast. The Afordir Corachod is also a crucial hub for the many trading routes crossing the Ocean from the Cibolan colonies.

Cywlach, also known as Calbain Cibola, is the largest Crown Colony of Calbion. From 1688 until 1693, it had the status of Talaith, until this was reverted by the Second ab Ioan government. The colony is located on the Northern coast of the continent of Cibola. It borders the Natopian Cibolan territory to the South East. The area was a frequent harbour for Calbain pirates for a century, but was only officially claimed by Calbion following the 1686 Western expansion. Cybwlach continues to be home to many mercantile entrepreneurs. The word Cybwlach is derived from the Calbic word for the Cibolan continent.

The region is home to several producers of Rum, and colloqually known as Y Lan Beryglus.

Kilda is the Northernmost Colony of Calbion. It's located on Arcadia Island, and home to the largest overseas military base of Calbion, the Kilda Naval Station. 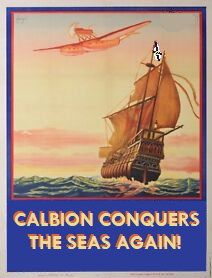 Also known as "gate to the sea" the island of Ynys Herydd is a strategic port in the trade for the Western Ocean. It is located to the immediate West of the Cibolan continent.