Ura'Byach, also known locally as Ura'Bos, is an island in the west of the Aeronesian archipelago in the Jasonian Sea. It is a Talaith of Calbion since 1686. The island has a history of being the subject of various types of military testing, conflict and regicide. It is smallest, and the most sparsely populated Talaith of Calbion. Living on Ura'Byach is extremely unpopular, not only because of the harsh natural conditions and real possibility of nuclear contamination, but also because of the legend of the "Curse of Ura'Byach", which claims that the island is located on top of the entrance of the underworld. From here, all kinds of evil could escape. This legend is used as an explanation for the rather unfortunate history of the island.

In ancient times the Isle of Ura'Byach was an integral part of the quasi-mystical Jasonian Empire. The isle subsequently passed through a multitude of colonial masters before being acquired by Shireroth during the Kaiseral Reign of Raynor XII who decreed the island to be a wildlife refuge. In the year 1636 Kaiser Hjalmar granted the ESB-Jörmungandr Group permission to establish a trading station and colony on the southern coast of the island. The colony played a small but vital part in the Euran War of 1636 to 1637 by acting as a conduit for supplies from the ESB Group and sympathisers in the Royal Government of Goldshire to the Free Associative Kingdom of Constancia. During this time, rumours of dragons and other mythical creatures on the island emerged, which were attributed to the testing of biological weapons.

In early 1641 Ura'Byach was the place where Operation Tymarian Sun, a pair of nuclear weapons tests, was carried out by Shireroth. It has subsequently been declared unfit for human habitation, ironically preserving it as a wildlife sanctuary for generations to come.

In 1650, the island housed a penal station where among others Adam Anushiruwân awaited trial. Adam managed to murder his visiting mother, Kaiseress Noor, there, but died in the ensuing fight. In 1652, the island was vacated to the Green by Shireroth, and the island remained without government until Arcadia annexed it in 1667. Aside from the Military station of Ura'Byach itself, the Calbain constructed the town of Solwch, which is home to Calbion's institute of Research and Technology. The population on the island remains largely of Shirithian descend. 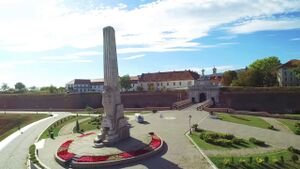 On the spot where Kaiseress Noor was murdered by Adam, her son, in 1650 AN, a monument was erected during the Arcadian times. The construction of this monument was initiated by Margaery des Vinandy. She made this gesture out of love for her fiancé, Noah, Noor's second husband. Visitors, who are sometimes seen as pilgrims, often place orchids at the monument, in memory of Noor. The local orchid-growing industry is flourishing, the orchids are sold all over Micras. Not far from this monument is the place where Adam died. On that spot the visitors spit in horror at his deed.