The Imperial Flag of Natopia

The Flag of Natopia represents the entire state and nation of Natopia. It is one of the most widely used and easily identifiable symbols of the nation. According to the Caprine Code is is an appropriate symbol for any occasion as it represents the Natopian state and the Natopian nation, whereas other symbols such as the Coat of Arms or Cross of Sovereignty have more narrow iconography. It has a length to width ratio of 2:1. The design of the flag includes a green chevron on a field of white. A narrow purple triangle is imposed on the chevron with two blue triangles on the open sides as well. A pale on the fly is predominantly blue with a thin narrow green stripe towards the hoist. All fields of color are divided by a thin white border.

The current flag was originally adopted in 2014 but is actually a refreshed version of the 2004 Flag which had a black field instead. This 2004 Flag is retained as an official alternate flag and may be used on military bases, vessels, and duty uniforms (the white version must appear on formal dress uniforms), to be flown at embassies at the discretion of that ambassador, used during periods of national mourning, or in environments that would otherwise make maintenance of a white flag impractical. 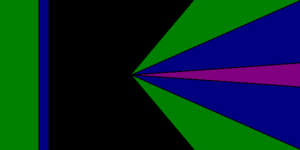 Unauthorized version used by the Bassarid Kingdom of New Normark.

An unauthorized, cheap, and illegal copy of the official alternate flag was designed by Natopian sleeper agents of the OSSSS embedded in the Pallisican Pretender Government of Elijah's Rest to show they are under duress by reversing the flag.

Explanations of the elements of the flag.

This design is the third major design in Natopian history. 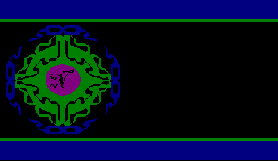 The second flag of Natopia

The first design reflected the five original Regions of Natopia (Dracoheim, Hoheit, Lochhatonia, Frieden, Belleville) and their relationship/dependence on the central government. It was quickly replaced by the second design. 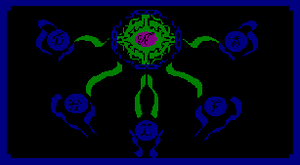